Freeland Building Has Been Oxford Landmark, Law Office Since 1905 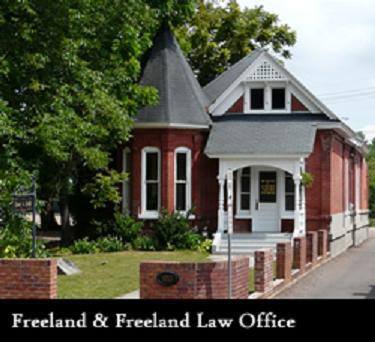 Freeland & Freeland and its predecessor firm, James Stone & Sons, have been located at 1013 Jackson Avenue in Oxford since 1905.
T. H. Freeland, III, joined the Stone firm and began practicing law here in 1958. Throughout its history, the firm has had a long tradition of outstanding appellate advocates, including past attorneys such as Phil Stone, Taylor McElroy (a former justice of the Mississippi Supreme Court), T. H. Freeland, III, and currently, T.H. Freeland, IV. The firm has a long tradition of bar service and pro bono work.
Just west of the Square, William Faulkner knew this small Victorian building well. His earliest novels were typed by the secretaries there, as a result of Faulkner’s friendship with Phil Stone. The building was built before the Civil War by the attorney William Sullivan. The Victorian tower at the front was added around the turn of the century. Later Faulkner described a structure almost identical to it in The Sound and the Fury:”We went down the street and turned into a bit of lawn, in which, set back from the street, stood a one-storey building of brick trimmed with white. We went up to the door and entered a bare room smelling of stale tobacco.”
The Freeland Building, as part of the Oxford Courthouse Square Historic District, was declared a National Historic Place on April 2, 1980.
Courtesy of John Cofield. Cofield is a hottytoddy.com writer and one of Oxford’s leading folk historians. He is the son of renowned university photographer Jack Cofield. His grandfather, Col. J.R Cofield, was William Faulkner’s personal photographer and for decades was Ole Miss yearbook photographer. Cofield attended Ole Miss as well.Contact John at Johnbcofield@gmail.com