Chick-Fil-A Oxford owner and operator, Lance Reed, told HottyToddy.com this week that he expected a record turnout for this year’s Princess ball. He estimated about 1,000 people, but who would have expected this!
We were returning from a business meeting in Tupelo this evening on Highway 6 heading west around 6 p.m. and suddenly came upon this line of cars on the right side of the road. At first, we thought there had been an accident. Then we thought it might be a traffic stop. Then, we noticed that it was stopped for at least a half mile in each direction. And once we realized the cars were turning in at The Jefferson, it dawned us….the Princess Ball! As we looked in, we saw another mile of cars on the road leading in and around the lake and into the Jefferson.
These were cars of daddies and daughters arriving for this year’s Princess Ball at the Jefferson! We were so amazed, we doubled back and got video going east, and we looped back heading west to capture the sight.
See the video below.

We contacted Reed at the event, and he said, “It’s been crazy. Probably over 1,100 people are here.”
Reed created and organized the event in 2013 as a way to bring the community together. He watched the event grow from around 400 people attending in one night that year to 600-plus people over two nights in 2014 and then 800-plus over two nights in 2015 at the Lyric. Last year, it was held at the Oxford Conference Center and grew even more.
This year’s record-breaking event is sure to result in some magical pictures that HottyToddy.com will bring to our readers, as we have a reporter on the scene to capture it. Stay tuned!
See this story fron last year with video of some previous Princess Balls. 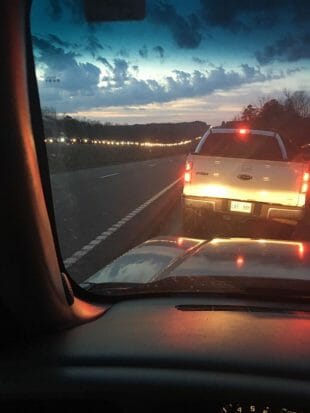