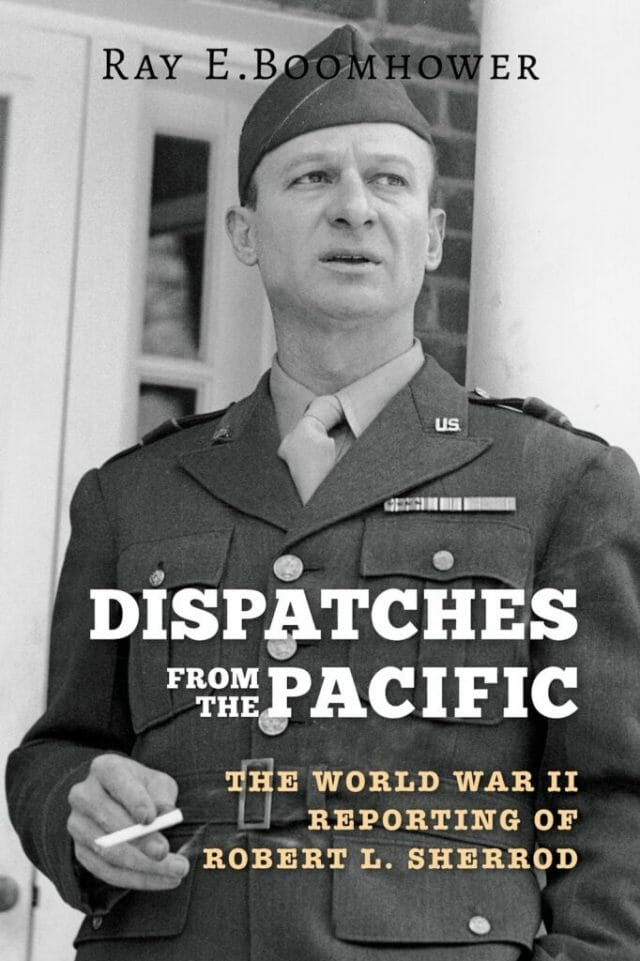 “Dispatches from the Pacific: The World War II Reporting of Robert L. Sherrod.” By Ray E. Boomhower. Indiana University Press. 242 pages. $24.00.
“It looks like the assignment of a lifetime,” Robert Sherrod remarked after Pearl Harbor, when Time Magazine sent him to the Pacific. Those words were prophetic: Over the next three years, traveling more than 100,000 miles, Sherrod would tell the stories of the United States Marine Corps’ most savage battles, from Tarawa to Iwo Jima and further, as the Marines fought their way island by island toward Japan.
Historian Ray Boomhower, who has written on Ernie Pyle, notes that Sherrod “became as important a figure for the U.S. Marine Corps during World War II as Ernie Pyle had been for the average U.S. Army soldiers—the GIs—fighting against Nazi forces … Sherrod became the spokesman for the Marines, articulating what they felt and suffered in combat to an often-uncomprehending public back home.”
In his first wartime posting, in Australia, Sherrod wrote about soldiers and pilots. He flew 10,000 miles in two months, interviewed pilots who were flying against the Japanese, and made it clear that American warplanes were constantly out-flown by Japanese Zeros. He could not report on one explosive story, a mutiny by black soldiers who resented wartime racism. (The Australians had tried to keep them out of the country, and white American soldiers had brawled with them when they went on pass into town.)


Tarawa was Sherrod’s biggest, most blood-soaked story. On November 20, 1943, the Second Marine Division went ashore there, landing on a Pacific island the size of Central Park. The American landing craft could not cross the coral reef; the Marines waded ashore, slowly, walking hundreds of yards under machine-gun fire. At the end of the first day, out of the 5,000 Marines who had landed, more than 1,500 were dead, wounded, or missing. The final casualty toll would be twice that high.
Tarawa counted as a victory. The censors rushed the news reports through, 223,000 words of correspondents’ dispatches in eight days. But Sherrod needed only two sentences to tell the story:
“Last week, some 2,000 or 3,000 United States Marines, most of them now dead or wounded, gave the nation a name to stand beside those of Concord Bridge, the Bonhomme Richard, the Alamo, Little Big Horn, and Belleau Wood. The name was Tarawa.”
That roll-call of battles spoke of the costs of war. It warned that the Marines had won a victory, but at a shattering price. Tarawa had been won “by sheer courage,” Sherrod wrote. “When the Marines had nothing else to fall back on, they had courage.”

Iwo Jima was different terrain—not a coral atoll, but a bleak volcanic island. In the black sand of the beachhead, Sherrod reported, trying to dig a foxhole was like trying “to dig a hole in a barrel of wheat.” Japanese artillery left mangled bodies, the worst carnage he had seen, and even the hospital wards were grimy—“stuffy with stale cigarette smoke which mingled with the smells of dirt and blood and the sweat of men who had been in the grimmest of battles for twelve to sixteen days.”
Accustomed to landing with the Marines, Sherrod fell into the ritual preparations of soldiers facing death. The night before a landing, he always typed a story. On a beachhead, he was as focused as any Marine. “Later, he reflected that it seemed funny that he had so industriously jotted down notes while under fire … while, at the same time, he felt certain he would not be alive to write stories based on them.”
In a cable to his editors, Sherrod warned that he could not tell the full story of the war: “There are simply more stories than one man can cover and one photographer can shoot.” Nonetheless, Sherrod did his best, and his best was exceptional. Drawing on Sherrod’s wartime dispatches, his personal papers, and the Marine Corps archives at Quantico, Ray Boomhower has told Sherrod’s own story outstandingly well.

Allen Boyer is the Book Editor for HottyToddy.com. His book “Rocky Boyer’s War,” a WWII history based on his father’s wartime diary of New Guinea and the Philippines, has been published by the Naval Institute Press.