The Black Diamond pours his heart and soul into near-Neil stage show.

Editor’s Update: The Black Diamond performance at Snackbar on November 14 is canceled due to illness.
By Tad Wilkes
tad.wilkes@hottytoddy.com
Nashville-based Theron Denson performs as The Black Diamond and calls himself “Earth’s Only Black Neil Diamond Impersonator.” Oxford will get to see The Black Diamond for itself when he pours on his version of Neil on November 14 at Snackbar. HottyToddy.com chatted with Denson about how life led him into the role of Neil Diamond.
HT: Why Neil Diamond? Why did you choose to emulate him instead of another artist?
Denson: It wasn’t so much my choosing Neil as him choosing me, so to speak. As an eleven year old boy and being one of just a few black kids in predominantly white Missouri and West Virginia churches, it was the Caucasian people that would turn and exclaim how much my voice resembled that of the icon as I sang whatever congregation wide hymn was being sung at the moment. I eventually decided it was time to discover this man who in my mind was one of mystery and intrigue and was NOT just another guy that went to the same place of worship as me—which until I figured out differently, I assumed to sort of be the case.
So I went out and purchased The Jazz Singer soundtrack and at that moment fell in love with his songs and his style, although I still did not quite see the resemblance folks frequently alluded to. Fast forward a few years to my being homeless basically in Washington D.C., living in youth hostels, and singing “Sweet Caroline” with a tip jar to earn money, I was summoned back to West Virginia, where the local paper wanted to do a story about me, since Neil was coming to Charleston,West Virginia, in concert in just a few days. I boarded a Greyhound bus and headed back for the interview with every intention of returning to D.C. but the story ran, buzz began, I was booked and never made it back to Washington.
HT: How long have you been doing this? 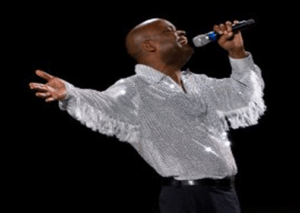 Denson: As of Sept 7,2012, the Black Diamond show has been my sole means of earning a living and I’ve been having a blast doing only it for 12 years. And what a colorful adventure it has been—taking me to Vegas, on stage as an opening act for the Pointer Sisters, the Village People, Brad Paisley, Three Dog Night, Sheena Easton, Taylor Dayne, Kathy Mattea and others. I’ve sung for three state governors, performed around the country.
Being new to Nashville is a thrill, and making my debut and first visit to Mississippi has me beyond ecstatic. I cannot wait to say hello to the good people and Diamond fans there. I even went to Hollywood sang on ABC’s Jimmy Kimmel Live at his invitation. I would never have imagined what would happen when the Diamond ride began, but I know that a ride on Neil’s wagon has been wildly wonderful and one I am completely enjoying still.
HT: What are the keys to putting on a good Neil Diamond show?
Denson: Number one is knowing your audience and HIS fans—connecting with them and reminding the audience that you realize you are by no means the megastar but are simply having fun singing his magnificent masterpieces. Always give the fans what they are looking for and expecting.
And, of course, that includes some “Sweet Caroline.” Mainly I just try to recreate him in my own way and defer to his iconic status and accomplishments as well as acknowledge his contributions to music and the world in general. It’s actually a pretty big job, and those are huge shoes to fill for sure.I certainly enjoy trying though.
HT: What other jobs have had besides being The Black Diamond?

Denson: You name it, and I have probably done it at some point—from waitstaff member to fast food to telemarketing and cashiering. The job I left to pursue the Black Diamond experience—even though I had yet to admit to myself or anyone else my dream of entertaining—was a front desk position of the Marriott hotel in Charleston. In retrospect, however, I see that each of those experiences got me to this point, and they taught me more about holding a microphone in sequins and throwing a party on stage wherever I may be. When I was let go from the hotel, and with the reality of no income setting in on Sept 7, 2000, I looked up towards the heavens and said, “Well God, it looks like it’s You, Neil Diamond and me now!”
HT: What are your favorite Neil Diamond songs and why?
Denson: I think I once heard Neil say in response to this same question that his songs were like his kids, and so it was hard to select a favorite. If that is the case, then they are probably my “nephews” and I am in the same position insofar as a favorite. During shows, I find that there is usually one I can’t wait to get to in the set, and every few shows that tune changes. Sometimes I sing with my Nashville band, and other times, as will be the case at the Snackbar, I’m with backing tracks. That, too, makes a difference as to which one I am most excited to rock as well. Currently it’s “Forever In Blue Jeans” though, band or track.
HT: Have you ever met Neil Diamond?
Denson: To date, there has been no meeting, but I have some folks with some clout trying to help facilitate that. I have heard he is aware of my Black Diamond show, and last year I did get a personally signed picture from (pictured below) him as a birthday gift, which made my whole year, I must say. To have the opportunity to meet the man, whose name has been such a major part of my everyday existence for years, would be a real honor and the career highlight that could not be topped—that is unless I got to sing with him.
For more information and to keep up with the Black Diamond online:
www.reverbnation.com/theblackneildiamondtribute
www.facebook.com/blackneildiamond
www.blackdiamondvocals.com
www.twitter.com/blackdiamondshow