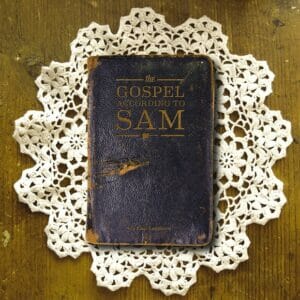 The prototypical discovery story of the 1960s involved eccentric northern record collectors descending upon the South in search of musicians who had made recordings in the late ‘20s or early ‘30s only to seemingly disappear. Most famously, the “rediscovery” of Mississippi John Hurt in March of 1963 and his triumphant second career largely stemmed from a line in a 1928 recording in which he mentioned his hometown of Avalon.

Sam Langhorn grew up in Oxford, some seventy miles northeast of Avalon, and although his style sounds remarkably like Hurt’s, it’s not known whether the men ever met. Unlike Hurt, Langhorn never made any commercial recordings, and the songs about to be released by Big Legal Mess Records—likely recorded in early 1963—are the first of his ever issued.

That such a talent could go unknown for so long may stem from the fact that his documentarians were neither folklorists nor record collectors, but Ole Miss football stars who simply enjoyed his music and company.

Langhorn was born in 1933 in rural Denmark, about ten miles east of Oxford, but moved to town after his father Walter bought a house in the Burney Branch neighborhood. According to Sam’s younger brother Ananias (“Ace”), he, Sam, and their elder brother Paul Willis all learned the guitar from their mother, Camilla, who had in turn learned from her mother, Clarissa Higginbottom.

Camilla Langhorn played mostly at a sanctified church on River’s Hill in east Oxford led by Elder Rush Lockhard. Oxford soul musician Herbert Wiley visited the church several times as a young man and was “amazed” by her abilities as a slide guitarist. Although Camilla taught her sons to play gospel guitar, they all turned to secular music as young men.

“She didn’t like it too hot, but we were grown,” says Ananias, now a resident of Akron. “That’s where the dollar was, so we followed the money.”

The story behind these recordings began when Eddie Khayat, a professional football player then staying in Oxford, saw Langhorn walking down the street with a guitar. A guitar player himself, Eddie brought him back to his home, where Langhorn showed him a couple chords. Eddie soon introduced the musician to his younger brother Robert and their mutual friend Jimmy Hall.

A star football and baseball player at Ole Miss from ’56 to ’60, Robert Khayat followed his brother’s path and signed on as a kicker with the Washington Redskins; during the first of his three seasons with the team he led the NFL in scoring and played in the Pro Bowl. While living in Washington Khayat learned to play guitar from a Mississippi-born bluesman whose name he’s now forgotten, trading football tickets for lessons. While in Washington he also saw Mississippi John Hurt playing at a local coffeehouse; Hurt moved to D.C. in 1963 in order to take part in the folk revival.

An academic standout, Khayat lived during the offseason with his wife back in Oxford, where he enrolled in law school. He and Hall also began spending a good bit of their free time hanging out with Langhorn. Khayat studied his guitar work carefully, had him play for small gatherings and recalls that “without exception everyone who heard him was stunned.”

Langhorn, he says, was initially shy and reluctant to sing, as well as a teetotaler. He suspects, though, that his guitar teacher may have picked up drinking after he began playing at fraternity and house parties. At those events, Khayat recalls, Langhorn “played everything—Elvis, R&B, country.”

Hall, who recalls that Langhorn was kicked out of church for playing the blues, likewise left behind a strict religious life upon moving in 1956 from Tupelo for Oxford, where he became a “hellraiser.” He played halfback for Ole Miss and was, along with Khayat, on the 1959 national championship team that only allowed their opponents to score a total of twenty-one points and shut out LSU at the Sugar Bowl.

After brief attempts with law school and the newly founded Oakland Raiders, Hall settled on a carefree existence in Oxford. A pianist, he related to Langhorn as a musician, but they also spent a lot of time simply hanging out—Langhorn’s wife Lina Mae would give them both dirty looks when he picked Sam to go cruising in his Triumph TR4 convertible.

“Sam was tall and lean, cropped baldhead, faded work clothes, no socks, wore-out brogans, missing teeth, some in front,” Hall remembers. “That’s why he always covered his mouth when he laughed.”

Their friendship, Hall says, was particularly meaningful given contemporary race relations. In October of 1962 the riots accompanying James Meredith’s enrollment as the first African American student at the University of Mississippi resulted in two deaths and the occupation of Oxford by tens of thousands of federal soldiers.

“We were two innocent human beings living in an insane society of bigotry, each killing the other over religion, race, poverty, money, jealousy and hate,” recalls Hall. “We were safe together. We knew that we would never walk this way again. It was our epiphany.” The recordings were made at Hall’s “shack,” and Khayat believes that the informal session may have been the first time they heard Langhorn singing multiple songs.

“It was a happy day for Sam,” Hall remembers. “He was dressed up in his Sunday best, which was a fresh clean shirt and pants with socks on and Sunday shoes.”

Hall and Khayat’s relationship with Langhorn was relatively brief—just a couple years at the most. Khayat would go on to teach at Ole Miss’ law school and, after receiving a doctorate from Yale, became a beloved Chancellor of the University, serving from 1995 until his retirement in 2009.

In 1964 Hall left Oxford for Greenwich Village, where he studied acting with Uta Hagen and subsequently appeared in many plays, musicals and television programs. His stage debut was in The Displaced Person, constructed from Flannery O’Connor stories, at the American Place Theater; Hall’s depiction of the Bible salesman who steals Joy Hopewell’s prosthetic leg received a glowing review in the New York Times. Hall currently lives in Santa Monica, and is still acting.

What, then, became of Langhorn?

According to Herbert Wiley, Longhorn played lead guitar in his soul band, the Checkmates, from the early ‘60s until the end of the decade, working with the band at both fraternity parties and on the regional chitlin’ circuit.

“Sam was kind of a shy guy,” Wiley says. “He used to sing one or two songs—[John Lee Hooker’s] Louise and Bony Maronie—he used to play both rhythm and lead on that. He kept his fingernails long—I don’t know how he did it, but, hell, he did it. Sam Langhorn was a hell of a damn musician. I ain’t seen nobody yet who could play like Sam. His brother Paul Willis couldn’t do it—he was a chord man.”

Both Paul Willis—who recorded several soul singles together with Allan Shaw for the C-O-S label—and brother Ananias moved up to Memphis in the 1960s, and as Ananias recalls, played at clubs across the river in the lively West Memphis scene, as well as in rural outposts such as Birdsong, Arkansas, where “Slack Britches” owned several juke joints. Ananias recalls that Sam would sometimes play with his brothers on these gigs, and that they in turn would sometimes play with Sam at his gigs in the Oxford area, often at private parties arranged by students in rural locations.

Ananias also said that Sam complained of having never been paid properly for his work providing music for a Western film; it was likely a reference to Vincente Minnelli’s 1960 Home From the Hill, shot in Oxford in 1959 and starring Robert Mitchum. During its filming, Sam became close with actor Denver Pyle, later famous as “Uncle Jesse” on The Dukes of Hazzard.

In the early ’70s Langhorn was a regular in the laid back bohemian scene in Oxford that centered around the “big house” at 1003 South Lamar; then student Lisa Howorth recalls that they would pay him by passing a hat, and has a particular strong memory of Langhorn playing her autoharp.

Local musician Dave Black began playing drums and then harmonica with Langhorn as a teenager back in ‘60s, when his uncle would pay Langhorn to play guitar at his automotive shop. In the early ‘80s Black—who led the popular local band the World Famous Relaxations—also played at local events in a trio together with Langhorn and guitarist Malcolm Cullen.

Local blues musician Bill “Howlin’ Madd” Perry, whose mentor as a child was Langhorn’s uncle Ned Boles, says that in the late ‘80s Langhorn would play occasionally at his club Perry’s in Abbeville, and that he was the “man of the hour” at local houseparties. Langhorn was a heavy drinker, he says, and Ananias recalls that his brother “went berserk once he started” on his favored MD 20/20 fortified wine. “He’d drink that mess until he started seeing things.” Brother Paul Willis, he says, died in the early ‘70s due to his own heavy drinking habit.

At some point in the late ‘90s or early 2000s Langhorn left Oxford for Ohio before moving on to Stuttgart, Arkansas, the home of one of his daughters. According to an online obituary Langhorn died there on October 5, 2007 at the age of 74; his occupation was listed as a mechanic, and it revealed he had served in the Army during the Korean War—a story that remains to be told.

The Gospel According to Sam will be released November 12, 2013 by Big Legal Mess Records.