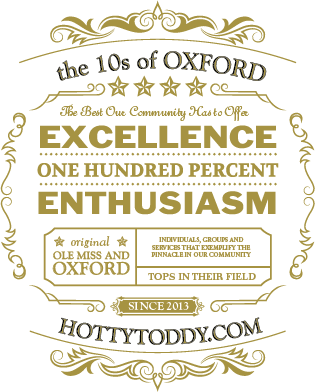 Welcome to the first installment of our series, The 10s of Oxford.

A previous article we published under this headline proved controversial in its focus on physical beauty.

The women AND men you’ll meet in HottyToddy.com’s 10s of Oxford may possess good looks, but it’s their character, determined spirit, class and real-world achievements that we’ll use as a qualifier for this honor.

Look for more 10s at the beginning of every week. We hope you’ll agree that the profiles in excellence captured here personify what is best about Ole Miss and Oxford and define that elusive, but powerful call to attention: Hotty Toddy!

Coach Johnny Hill has devoted his life to making a positive impact on the lives of student athletes.

The head football coach and athletic director for Oxford High School’s runner-up  2013 class 5A state champions, began coaching in the 1980’s at Marshall Academy in Holly Springs, Miss. He began his first stint as Chargers’ head coach in 1989. After leaving to coach the Tupelo Golden Wave, he returned to Oxford’s blue and gold sideline in 2000.

Under Hill’s direction, the Chargers have had very good teams over the years that made deep runs into the state playoffs. His 2003 squad advanced all the way to the Class 4A state championship against Wayne County.

It’s been ten years since that game, and the Chargers made it back to play for another state championship on Dec. 7, against the Picayune Maroon Tide. Although they lost that game 42-35, the sting of the loss in no way diminished Coach Hill’s pride in his record-setting squad.

“For the first time ever, our football team has set a school record winning 14 games in a row. This is an achievement that makes all of us proud,” Oxford High School Athletic Director and Chargers Head Football Coach Johnny Hill said. “I am extremely excited for this group; this is what we’ve worked all season to do.”

With the mix of under and upperclassmen on Hill’s team, it created something special this year. People who have known Coach Hill for years, like HottyToddy.com sports editor Adam Brown, say he is a demanding disciplinarian who seeks to get the best out of each one of his players.

He also demands excellence in the classroom from his athletes.

The successful coach has been in the news so much lately that we decided to let him quote himself in this video clip that is representative of Hill’s dedication and love for his team.

She’s worked as a staff photographer, picture editor and multimedia producer for several publications, including The Columbus Dispatch, The Dallas Morning News and deputy director of photography at The Atlanta-Journal Constitution.

She was part of the photo team for The Dallas Morning News that won the 2006 Pulitzer Prize in Breaking News for their Hurricane Katrina coverage where she served as a picture editor. For the last three years, Steele has done the picture editing and layout and design for the Arnold Schwarzenegger Sports Classic coffee table book and she did the official photography and poster design for Lifeline of Ohio, an organization that specializes in organ donation.

She’s won numerous awards for her picture editing, but Steel is particularly proud of her latest project, Jewels of the Delta, as part of the Center for the Study of Southern Culture’s Brown Bag Lecture series on Wednesday November 13.

Steele completed interviews with dozens of Mississippi Delta church mothers, and plans to interview many more for her Jewels of the Delta book project.

“Oh my, they have such rich stories – sad, hilarious, deep and profound,” Steele said. “A wealth of history we that should listen to. Women who grew up as sharecroppers’ daughters, who wanted to leave the cotton fields and show their children a different way of life. Education was everything to them and they made sure their children received the best education they could provide. We should honor these women.”

Former Ole Miss lineman Terrence Metcalf is used to facing opponents head on. He did so for four years at Ole Miss and for many years after that as an NFL player for the Chicago Bears. Now the Rebel legend is focused on helping Oxford’s Chance Tetrick, age 10, fight an even more powerful opponent—leukemia.

Metcalf and Chance go into our first round of Oxford 10s as a team.

Metcalf was the co-organizer of the Benefit Dinner and Silent Auction for Chance held Sept. 16 at the Oxford Convention Center.

Oxford’s Clay Rodgers, the co-organizer of the event, praised Metcalf for his exhaustive support. “When I messaged Terrence on Facebook about Chance’s situation, he immediately replied and said he was on board for a fund raiser,” Rodgers said. “In fact, Terrence’s exact words were: ‘Clay, I’m a man of action. Let’s do this.’”

Together, Metcalf and Rodgers coordinated a meaningful night for the Tetrick family and the Oxford community. They raised critical  funds to help the family with the extensive expenses associated with fighting an illness like Leukemia.

HottyToddy.com spoke with the Rebel great and asked why he was so committed to helping others. “I have been blessed by God,” Metcalf said, “and I believe in giving back in whatever way I can. We organized the fund raiser an inspiring event to help this brave Tetrick family offset some of the tremendous expenses they are facing.”

Chance will undergo a three-year regimen of rigorous chemotherapy at St. Jude Children’s Research Hospital in Memphis. Six months into the treatment, the disease is taking its toll on not only Chance and his family, but on their pocketbooks, as well.

Chance’s leukemia has been anything but “ordinary.” When diagnosed, the young boy had cancer in his brain, spine, and bone marrow, and has since had many complications over the ensuing months.

But Chance is a fighter who has inspired the Ole Miss Rebel coaching staff and football team — including past players such as Metcalf. “This benefit was a great way to show support for Chance,” Metcalf said.

Chance is battling an unusually aggressive form of leukemia that will require several years of treatment. Much like he did in the days he spent protecting QB Eli Manning’s blind side, Metcalf is ready to do all he can to help Chance as the boy battles the toughest opponent imaginable.

“The Tetricks are not bitter,” Metcalf said. “Far from it. They present this medical battle to Chance as simply another experience he is having in life — an experience that offers them the opportunity to show their faith in God and where He is leading them.”

Metcalf, whose son DK is a Division-1 prospect wide receiver at Oxford  High, said he is committed to making sure everyone in attendance realized Chance and his family remain upbeat as they face whatever each new day may bring.

Kay Hightower was just looking for an affordable temporary place to stay with her 4-year-old child and husband when she moved to Oxford in 1998.

The co-owner of Hightower Property Management immediately recognized a glaring need in town for transition housing for people who require fully equipped living space for a short period of time.

In 2006 the Hightowers purchased some rental properties and began leasing them to short-term customers. “Shortly after that some people we knew with kids graduating from Ole Miss asked if we thought we could find people to rent their apartments,” she recalled. “My first reaction was ‘I have no idea.’ Soon people from all over the country were asking us to facilitate rentals and a thriving business was born.”

Kay and Roy took on the challenge and proved skillful at dealing with the public and running an efficient and high-quality rental business. Kay says the Hightowers had always dreamed of opening up a bed-and-breakfast, but have come to find the short-term rental business even more satisfying.

“This way we don’t have to fix people breakfast,” she says with a smile.

But don’t think hospitality isn’t priority one for the conscientious proprietor.  “I love what I do because I love working with people to make sure their stay in town is enjoyable,” she said. “I enjoy meeting people from all over the country and my husband and I have made good friends with some of our clients over the years.”

Dr. Sarah Lacy has devoted her life, 39 years to be exact, as an educator in the Oxford School District.

Her love for teaching expands well beyond the classroom; she is also the school’s sports statistician. “I have always loved sports and it goes back to watching it with my daddy,” said Lacy.

During Lacy’s tenure with Oxford, her favorite times were watching the kids, her students, excel. Whenever an athlete did well on the field, court or diamond, she let them know about it. “If you’re involved with what they are doing and they know you care, then their attitude is so much different,” Lacy said. “Because you gain the student athletes’ respect when you go out of your way to watch them do something they love.”