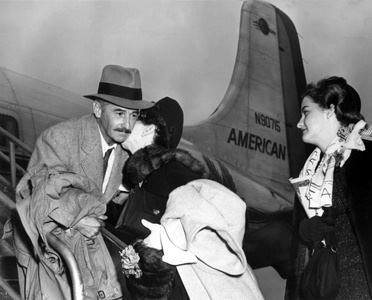 Estelle said goodbye to William and Jill at Memphis Airport, on December 6, 1950, as they depart for New York, en route to Stockholm, where Faulkner accepted the 1949 Nobel Prize for Literature.
The Nobel Prize in Literature 1949 was awarded to William Faulkner “for his powerful and artistically unique contribution to the modern American novel.”
William Faulkner received his Nobel Prize one year later, in 1950. During the selection process in 1949, the Nobel Committee for Literature decided that none of the year’s nominations met the criteria as outlined in the will of Alfred Nobel. According to the Nobel Foundation’s statutes, the Nobel Prize can in such a case be reserved until the following year, and this statute was then applied. William Faulkner therefore received his Nobel Prize for 1949 one year later, in 1950.
Courtesy John Cofield. Some copy courtesy of Nobelprize.org. Photo courtesy Memphis Commercial Appeal (c) The Cofield Collection