Katherine and Margaret are Oxford’s King twins. They recorded their infamous escapades in 1950s Oxford in the first two books: Y’all Twins? (2012) and Which is Which? (2013). Their adventures have been well-known ever since they climbed on back of William Faulkner’s wooden buggy as little girls. 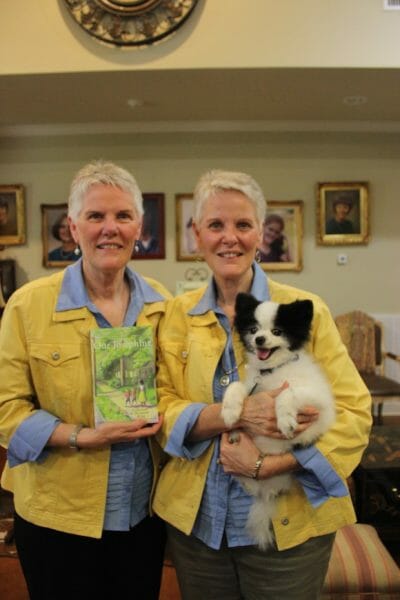 Their third book, Our Josephine, is scheduled for release on July 1. The novel tells not only their own stories but also tales of their grandmother’s caretaker, Josephine Sanders.
After reading The Help by Katherine Stockett and To Kill a Mockingbird by Harper Lee, the twins were inspired to seek out Miss Josephine, who they hadn’t seen since 1969.
“This book takes place pre-Civil Rights,” Katherine said. “Things were boiling over then. We were at the cusp of an explosive time.”
Margaret explains how she and her sister didn’t fully understand the way things were and how they were changing at the time.
“Josephine had to walk behind us on the sidewalks and we would look behind us constantly asking her to join us up front,” Margaret said. “We loved her so.”
The Twins vividly remember Josephine having to explain the state of race relations in the 1950s to the girls, even though Josephine was only 16 herself.
“I remember walking up to the colored fountain,” Margaret said. “I thought I might get colorful flavored water. It never occurred to me then that that was segregation.”
The girls remember asking Josephine numerous and relentless “why’s,” but Josephine taught them far more than they asked, the Twins said, including graciousness, patience and kindness. Her lessons have remained with them ever since their separation in 1969.
“We look back on our memories,” Katherine said. “We had to find her so we could tell her story too.”
The search for her took nearly three years, but the Twins finally located sweet Josephine in Vicksburg, Miss.
Josephine Sanders and her family will be in Oxford for the book signing on July 1 at Square Books.
“I am beyond surprised,” Josephine said. “I am grateful that they want to tell my story. I am so excited! Of course, I’m ready to come up to Oxford!”
Katherine said she doesn’t think Josephine fully realized the Twins were writing a book about her until it was published.
“She couldn’t believe somebody saw something in her or that her story was worthy of being told,” Katherine said.
“This [book] is about Josephine,” the Twins agreed. “It shows her graciousness, her love, and her legacy.”

“Katherine was the mastermind,” Margaret began, remembering her twin’s mathematical skills, as well as the instigator behind many of the duo’s quests.
Katherine finished Margaret’s sentence: “But I do believe that if you put us two together we make one great person. Margaret is my best friend for life.”
They remembered when their authorship began, back in 2000. It was to save them from repeating the stories over and over again to family. The twins come from a large family, which includes three brothers: Bill, Kirk and Allen King. The King crowd has continued to grow with children and grandchildren. The twins’ stories are always a hit at family reunions.
“It’s nice to go back,” Margaret said. “We went on so many adventures and tricked everyone, especially our teachers.”
“It all began when we were separated for the first time,” Katherine added. “They put us in different classes in first grade, so we met during recess and thought we should check out each other’s classes.”
The pair’s antics continued as they grew up. For example, one day the Twins spotted some rappers (musicians) as they were driving one day. Katherine insisted that Margaret back the car up. She said, “I want to rap because we don’t have to carry a tune!”
“We called ourselves, ‘Crappers,’ because well, we can’t sing but we could do a beat,” Margaret said. Today, the Twins have 19 music videos and their own YouTube channel: yallkingtwins.
“Folks should come out to see us rap at the book release! And we have cookies too,” Margaret added.
– Photo and story by Callie Daniels, staff writer for HottyToddy.com. She can be contacted by emailing cadanie2@go.olemiss.edu