Ole Miss graduates Norman Adcox (third from left, ’84, Broadcast Journalism) and Scott Coopwood (center, ’84 BA in English) found themselves playing acoustic guitars one afternoon on the front porch of the KA house when they were pledges. A quick musical bond took place as well as a long-lasting friendship. 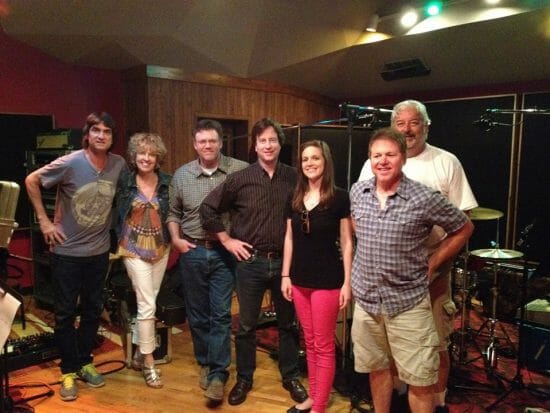 Shortly after graduating from Ole Miss, they recorded 19 songs in Scott’s living room in the small Delta town of Shelby. Neither Scott or Norman gave these songs another thought until Scott found them this past January while going through some old tapes in a closet at his Cleveland, Miss. home – 29 years later.
Neither are strangers to music.
After graduating from Ole Miss, instead of going to law school, Coopwood, received a recording contract from a record company in New York. Adcox, entered the marketing business in Memphis, but continued to write and record songs.
After Coopwood’s time in the music business, he entered the magazine and newspaper publishing business and has been in it ever since. He is the owner and publisher of Delta Magazine, Delta Business Journal, and The Cleveland Current, all based in Cleveland, Miss. And while Coopwood stopped trying to “make it” in the music business, he still continued to play as a “hobby” and has released many records over the years through his small label, WaxSaw Records. Besides producing his own, he has also produced many records by other artists.
“After finding the songs we had written, I listened to them and felt some were pretty good,” says Coopwood. “So, I made a copy and emailed them to Norman in Memphis and he felt the same way. We chose the best ten and recorded them at my small studio, and at Ardent Recording Studios in Memphis, and Sound Emporium in Nashville.”
Coopwood’s close friend, noted record producer Norbert Putnam, (producer of Jimmy Buffett, Dan Fogelberg, and many others), introduced him to one of Nashville’s top session guitarists, Pat Buchanan who then helped Coopwood secure the other Nashville session players: Greg Morrow (drums), Alison Prestwood (bass), and Tony Harrell (piano and organ). Kristian Dambrino, who was Miss Mississippi a few years ago, lives in Nashville and helped with background vocals.
“All of these musicians have played with some very well-known stars,” says Coopwood. “In fact, this lineup is really Amy Grant’s touring band.” Five songs were recorded with the Nashville musicians.
Coopwood and Adcox will release a CD in September. On October 2, they will be the musical guests on the Thacker Mountain radio show that is broadcast from Oxford each week over the Mississippi public radio system.