UM Theatre Kicks off Season with Play about Genocide, Africa

The Ole Miss Theatre Department kicks off its season this week with We Are Proud to Present a Presentation About the Herero of Namibia, Formerly Known as Southwest Africa, From the German Sudwestafrika, Between the Years 1884-1915.
The title is without a doubt a mouthful but the doors open on this play tomorrow at Meek Auditorium at 7 p.m.
This play is about a genocide in Africa at the hands of German colonists during the 19th century. There were two tribes involved: Namibia, a German colony, and Herero, the favored tribe by Germans. When the territory’s resources were drained by railroad construction, the Germans took land from both tribes. Herero rebelled and Germans exterminated them with survivors used as unpaid laborers.
Jackie Sibblies Drury, while finishing her playwright degree at Brown University, wrote this wordy play. Her fascination with late 19th century subjugation of the indigenous Herero people by German colonists spurred her to develop this play. However as she told Washington Post, she had to make this historical story relateable to present day. Drury then cast the story in an inception: a play within a play. A cast ensemble of black and white actors discussed how to collectively portray the characters, the story of historical Africa. They had access to only a cache of letters from German soldiers to their families, and they debated fiercely over accurately portraying a historical event based on potentially biased records left behind by half the participants. 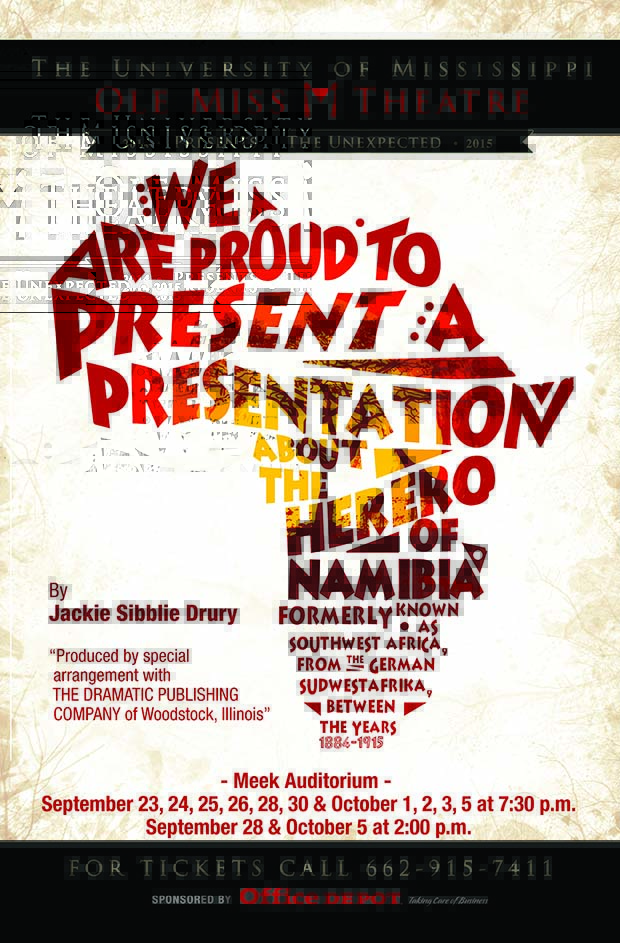 “It’s sort of a dark comedy that makes one aware.” said David Reed, theatre instructor and director of the production. “It’s hilarious and pointed, a smart and profound play. It’s a good exercise for our student audience and our student actors to be aware of their society.”
He said the timing of the play seemed appropriate in past events that occurred at University of Mississippi. René Pulliam, theatre department chair and musical theatre professor, agreed with Reed.
“It talks about stereotypes and diversity, how we interpret other people,” Pulliam said, “In light of recent events on university campus from ‘The Laramie Project‘ to what happened to James Meredith’s statue, I think it’s important that we talk about diversity.”
The production will take place at 7:30 p.m. at Meek Auditorium on Sept. 23, 24, 25, 26, 28 and 30 and again October 1 through 3 and Oct. 5. On Sept. 28 and Oct. 5, the play will be also have a matinee performance at 2 p.m. Tickets are available for ordering online here.
Callie Daniels is a staff reporter at HottyToddy.com. Write her at callie.daniels@hottytoddy.com for comments, criticism and/or story ideas.