Curtis Wilkie On "Assassins, Eccentrics, Politicians and Other Persons of Interest" 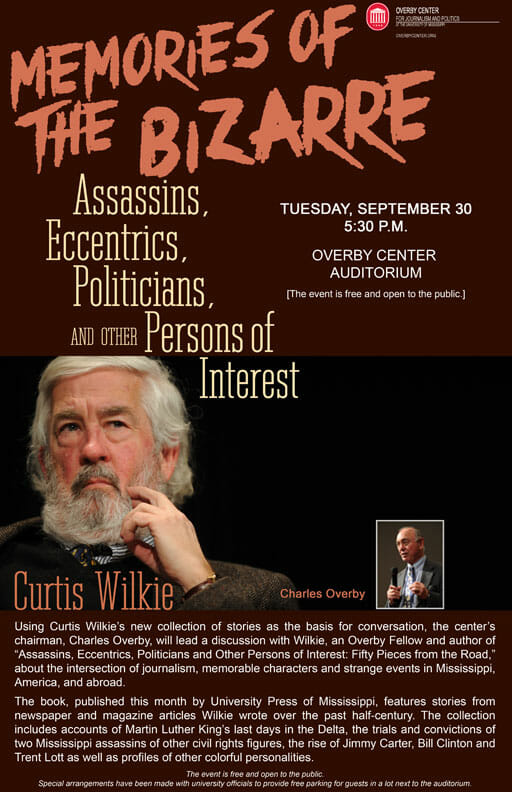 Curtis Wilkie is a veteran reporter whose print career stretched nearly four decades before he became an Overby Fellow at University of Mississippi. He appeared at his campus habitat, the Overby Center, last night to share a new collection of his stories with his friend and kin Mississippian journalist Charles Overby. Some may remember Overby led the Clarion-Ledger to a Pulitzer Prize in 1983 when he was executive editor of the newspaper. He and Wilkie had a conversation about writing and wealth of stories in Mississippi which will appear in Wilkie’s book.


Wilkie’s book, “Assassins, Eccentrics, Politicians and Other Persons of Interest: Fifty Pieces from the Road,” was published this month by University Press of Mississippi. A week after the anthology’s release Clarion-Ledger listed it as the second best-selling book in the state.
Wilkie’s first job post graduation from University of Mississippi in 1963 was at Clarksdale Press Register when a ‘local story’ – the civil rights movement – grew into pivotal history for the nation. He then spent most of his career as the national and foreign corresponded for the Boston Globe whilst covering eight presidential campaigns, serving as chief of the Globe’s Middle East bureau in Jerusalem in the mid-1980s and reporting on stories from more than 50 countries. Wilkie chronicled his most memorable articles, which were set in the South, in his book.
The collection contains accounts of Martin Luther King’s last days in the Delta, the trials and convictions of two Mississippi assassins of other civil rights leaders, and the rise of Jimmy Carter, Bill Clinton and Trent Lott as well as profiles of colorful figures from the “Gonzo” writer Hunter S. Thompson to the PLO military leader Abu Jihad.
HottyToddy.com staff report
Facebook
Twitter
Pinterest
Previous article
Oxford Police Announce GameDay Traffic Plans
Next article
Rebel Baseball Announces 2015 Schedule