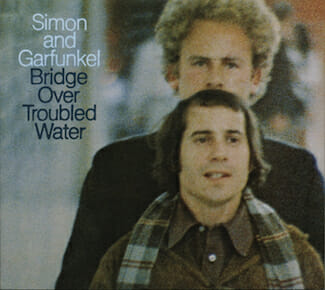 Billboard Top Songs of 1970
Simon & Garfunkel broke into the year with “Bridge Over Troubled Water” March through April. The Guess Who brought in late spring with “American Woman” / “No Sugar Tonight.” The Carpenters bid farewell to late summer with “(They Long to Be) Close to You.” Diana Ross barreled out “No Mountain High Enough” for a good chunk of fall before Jackson 5 trotted out “I’ll Be There” that lasted well into November. George Harrison bid farewell to 1970 with “My Sweet Lord” / “Isn’t It A Pity” on Dec. 26th. 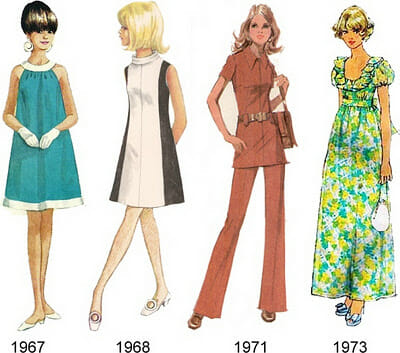 Fashion — Hippie and Glamour Wear
Fashion of 1970 continued the hippie look from the 1960s with a distinct ethnic vibe. Ladies’ hippie staples were tie-dye shirts, Mexican peasant blouses, folk-embroidered Hungarian blouses, ponchos, capes and military surplus clothing with bell-bottoms, gauchos, frayed jeans and maxi skirts. The colors were bright with Indian and Native American patterns as well as floral patterns. Accessories popular during this time were handcrafted neck ornaments and leather. Headbands, floppy hats, large scarves and Birkenstocks were popular during this time too.
Even though the hippie look was widespread not everyone adopted the status quo. Many ladies continued the 1940s glamour inspiration while others adopted simple casual fashions. This included fitted blazers with wide lapels, mini skirts, maxi evening gowns, little tight-fitting shorts, and flared pants. His-and-her outfits were stylish during this era too. Pastels were popular: mauve, peach, apple green, pink, yellow, wheat, camel, gray and baby blue. Sweaters were the staple of countless outfits. The accessories were cloche hats, pearl jewelry and black-veiled hats. Boots and wedges were popular among this crowd. 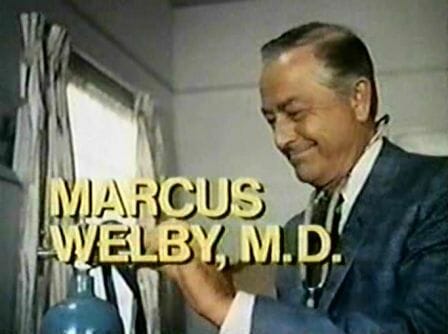 Popular TV Shows
1. Marcus Welby, M.D. (ABC) 2. The Flip Wilson Show (NBC) 3. Here’s Lucy (CBS) 4. Ironside (NBC) 5. Gunsmoke (CBS) 6. Hawaii Five-O (CBS) 7. Medical Center (CBS) 8. Bonanza (NBC) 9. The F.B.I. (ABC) 10. The Mod Squad (ABC)
It’s a small peep into the pop culture but it is easy to say those days were different, to say the least, from today. It’s been a long time coming but the Rebels are on a roll! Here’s to a great start to the SEC schedule against the biggest opponent and may we all have a great time in Oxford.
Hotty Toddy!
Callie Daniels is a staff reporter for HottyToddy.com You can write her about this article at callie.daniels@hottytoddy.com.
Facebook
Twitter
Pinterest
Previous articleESPN's College GameDay Analysts Excited about Ole Miss
Next articleMitchell: Behind the Scenes of ESPN College GameDay