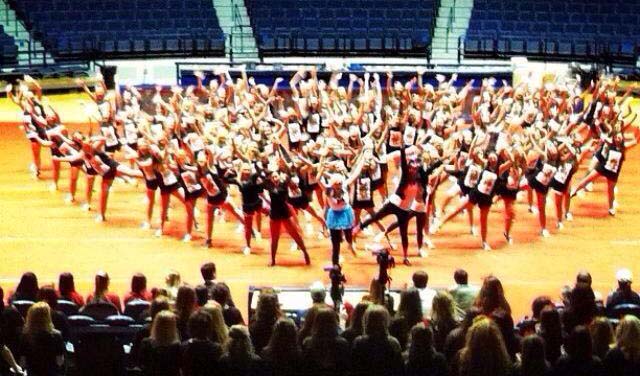 Theta Encore, Kappa Alpha Theta’s annual philanthropy event, will gear back up on the Ford Center stage at 7 p.m. tonight.
The dance-off, which raises money for Theta’s philanthropies’ CASA (Court Appointed Special Advocates) and the Scarlet Akins Foundation, is between all 10 sororities. New members of each sorority are taught a routine by an active member that is between five and 10 minutes. Elaborate costumes are made to accompany the dances.
Several songs are played during each sorority’s dance, with different groups of girls dancing in each part. One of the most anticipated events of the fall semester, the winning sorority gets bragging rights for a full year, rights that are normally told to potential new members during recruitment as a rush tactic. 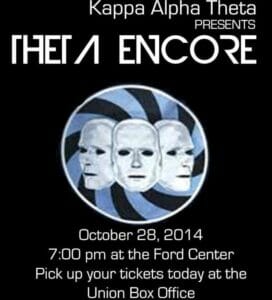 Sorority members are especially excited for Theta Encore this year, as in 2012 it was cancelled during the middle of the performances at the Ford Center. One sorority’s costumes included powdered hair, which got on the floor of the stage and became a safety hazard, preventing the competition from continuing. Last year, the event was held in the Tad Pad as an attempt to make the dance competition run smoother. Students are happy that Theta Encore will again take place in it’s traditional home, the Ford Theatre.
The second part of the event is the blood drive, which took place in the parking lot near the baseball field on Old Taylor Road this year. Theta joins with the Mississippi Blood Drive each year to encourage donations from students. Each girl who gives blood gets a point for her sorority, and these points are added into the dance score for the overall winner.
Last year Delta Gamma and their “Circus” theme won the competition. In second came Kappa Delta, with a “Tiny Tots/Pageant theme,” and Chi Omega came in third with a “Magic Show” theme.
Tory Thompson, one of Delta Gamma’s coaches last year, describes the feeling of winning first place in this huge competition.
“I felt happy, overjoyed, and relieved. But most of all I felt proud. Winning wasn’t about the glory or the name. Winning was about working as a team, seeing the girls have fun and seeing them bond as a pledge class. Win or lose I couldn’t have asked for a better group of girls to have worked with.”
Tonight, the lively event will continue as sororities compete for the title of the winner. Amidst all the excitement that follows this announcement, the most impressive thing about Theta Encore is how much money the event raises for each respective charity. Theta Encore is easily the most anticipated philanthropy event of the year, and therefore raises a great deal of money. And that is something worth dancing about!
Below are videos of the sororities’ that placed in the competition last year: Delta Gamma in first, Kappa Delta in second, and Chi Omega in third, respectively.