The Rocketboys Trek from Texas to Rock Oxford 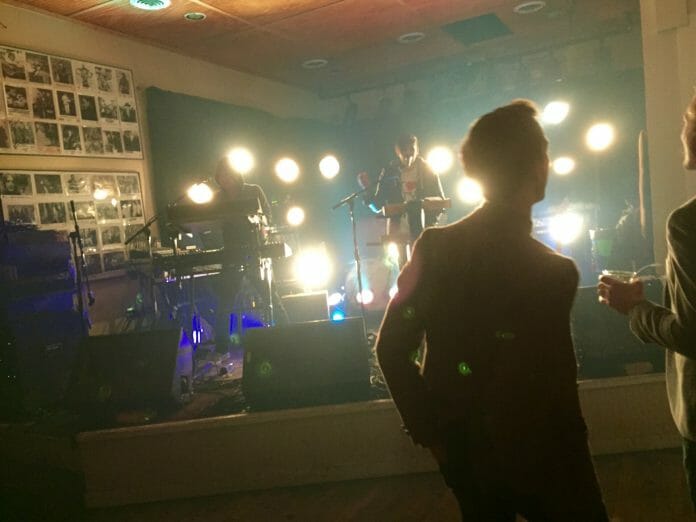 Mississippi and Texas combined for a stellar rock show on the Square Tuesday night.

Texas-based rock outfit The Rocketboys performed at Proud Larry’s in Oxford. Synth-pop duo And The Echo, Winn McElroy and Morgan Pennington, from right here in Oxford, opened for The Rocketboys with a light show combined with an outstanding vocal.

was featured on the season premiere episode of Glee on January 6th and debuted as #30 on the Billboard Heat Seekers Chart!

The Rocketboys’ said this was an awesome experience, because instead of the song simply being played and sung, the song was integrated into the theme of the show and the lyrics were even portrayed as a character.

The band is comprised of John (number one), Justin, Brandon, Lang, and Josh (number two). The original band started as a college band at Abilene Christian University in Abilene, Texas years ago where the band was playing at the oldest miniature golf course in Texas and now the band is on a 17 day tour with 12 shows!
Needless to say they’ve come a long way.

“20,000 Ghosts,” the bands first album, was based off a quote from John Newton the writer of Amazing Grace. The slave owner was haunted by the “20,000 ghosts” of his past. Each song on the album reflects this idea, explained the Rocketboys.

Their current tour is in support of the Rocketboys newest release, “Left I Right” EP which is their debut with Black Magnetic Records. The record was recorded with producer/engineer Joe Chicarelli, who has worked with the Manchester Orchestra, The Strokes, The Shins, in July 2014 in Los Angeles, California.

The band has also had great success on TV shows such as “Elementary,” “Royals,” and “Private Practice.”

“We did what our parents told us and went to college, now none of us use our degrees,” The Rocketboys said.

Kate Robison is a HottyToddy.com staff reporter and can be reached at akrobiso@go.olemiss.edu.