Festival goers from last year’s Five Star City Fest will easily recognize the colorful and inviting Five Star City Fest poster and t-shirt design that will be featured at this year’s event. Local artist Cristen Craven Barnard has again provided the beautiful artwork for the second annual event, which takes place on Friday and Saturday, May 8 and 9 in Gabbert Park in Senatobia. 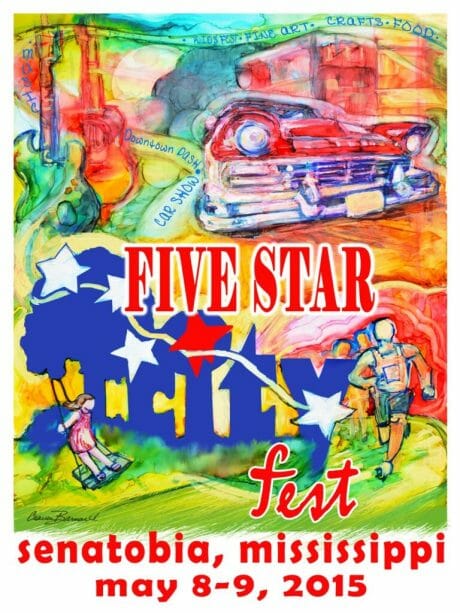 Last year, Barnard created the Five Star City Fest’s logo and the artwork for posters and t-shirts. She explained that she had been asked to incorporate the logo into the artwork. “The logo was kind of a jumping off point. Once I had the logo developed, I had the direction I was going with the art,” Barnard said.

She drew inspiration for last year from going to past Mayfairs. “I was inspired by the tents, the local musicians, the kids and even the little dogs that people would bring to Mayfair,” she said.

This year, she added the Car Show and the Downtown Dash to her artwork. “Having vintage cars is always interesting in art. I enjoyed watching the runners run along the route last year. I loved the feel of that, and wanted to add it into this year’s art,” Barnard said.

Barnard’s artwork, which has been featured in magazines, books and book covers, newspapers, documentaries and television shows throughout her career, is always colorful. “It’s just the way I paint. I use a lot of colors,” Barnard said.

Barnard began her career in art at the age of four drawing on butcher paper and “displaying and selling” her creations in her parents’ country store in the Mississippi Delta. She has worked professionally as an artist for over 25 years and has won numerous art awards, including an international award in 2014, “Keeping the Blues Alive for Art.”

She has lived in Senatobia for about seven years. She grew up in Clarksdale, and lived in Tallahatchie County before moving to Senatobia.

Barnard’s artwork, which is colored ink and acrylic, was created specifically for printing City Fest posters and t-shirts. “I started with a wish list from the committee and tried to bullet point the things that need to be on the poster this year. In the end, I have to tell the story of the event with my art,” Barnard said.