From Barefoot to Stilettos: An Inspiring Story to Find Your “YES”

“I have always regarded stilettos as a symbol of power, poise and perseverance. I tell everyone that my own stilettos are made and reinforced with titanium, a metal characterized by a high melting point, resistance to corrosion, and the highest strength-to-weight ratio of any on earth- in other words, composed to withstand the upmost pressure,” Marie Pizano said in her forward of From Barefoot to Stilettos, It’s Not For Sissies.

Marie Pizano is an American author, actress, producer, motivational speaker and the CEO and Founder of MVP3 Entertainment Group. Her book, From Barefoot to Stilettos, It’s Not For Sissies, is her life story of hope and encouragement. It has received praise and support from Mississippi greats like Morgan Freeman and Clarksdale Mayor, Bill Luckett.

Her company is based in Memphis, Tennessee. She produces commercials, movies and music videos, to name a few, and is a leader in the entertainment industry. She has produced movies in Chicago , Memphis and in Mississippi, and currently in LA.

“Bill Luckett is a friend of mine, but also my attorney and business partner as executive producer on a couple of my films,” Pizano said. 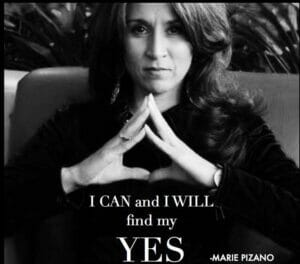 From Barefoot to Stilettos Background

Pizano is a native of Chicago who moved to Memphis years ago. In her book, Pizano references many ups and downs that she has had in her life. From being raised by a single parent, losing loved ones to having a life-altering motorcycle accident, Pizano has learned to always get right back up and move forward through any difficulty in life.

“The inspiring first person story of a woman driven to prove to the world that she can,” Freeman said in reference to From Barefoot to Stilettos.

“The Crush” and the Accident

After graduating from high school, winning a beauty pageant, dating her high school crush and landing a modeling job in Los Angeles, Pizano felt on top of the world. That is, until her world came to a “Screeching Halt”, as she names one of the chapters in her book.

Pizano and “The Crush,” as she refers to her high school sweetheart in her book, after a day of fun at the beach, Pizano and “The Crush” were riding his motorcycle, until it happened. A crash! Broken and bruised up, she knew she could not fulfill her duties as a model in Los Angeles and did not sign her contract. She was beside herself, but did not give up.

What Does “T” Stand For?

It took a while, but Pizano did not let her motorcycle accident, or anything life threw at her, control the rest of her life. She learned early in life to not take “no” for an answer and to find her “yes”.

On her right leg she has the scar of a “T” and, like any scar, it became a reminder. When golfing once, she was discussing with Morgan Freeman what her “T” shaped scar meant. Freeman saw it as a symbol.

“From surviving a life changing motorcycle accident, he said ‘T for Tough’,” Pizano said. “After Morgan said this to me, his words reminded me of who I am and that I can get back up, even after life knocking me down like Rocky Balboa. I got back up by those words he said to me, and he inspired me to get back my “eye of the tiger” and to tell my story. His words empowered me and reminded me, ‘YES I CAN’.”

Pizano said that writing her memoir was a healing for her and it is something she can use to give back. The book has turned into a film called “Barefoot To Stilettos” and a comic strip named “Stiletto: The Powerhouse Baroness.” She wants to give back to the community and has chosen to give back to military heroes.

“The book and movie gives back to give a 100 percent donated home to a military hero,” Pizano said. “If you read my book, you will understand that my family has a history of serving our country, so I partnered with Military Warriors Support Foundation.”

Pizano’s book can be purchased on amazon.com. Learn more from Pizano and read inspiring quotes from her book’s Facebook page, From Barefoot to Stilettos.

From Barefoot to Stilettos, has received numerous reviews from major book review sources such as Kirkus, Red City Review and Jack Canfield, co-author of the Chicken Soup for the Soul series and The Success Principles.

“Using the stiletto as a metaphor for finding one’s voice, courage, and perseverance through tough, emotional times, Pizano effectively writes of her difficult life in this memoir,“ Kirkus said.

“From Barefoot to Stilettos is both entertaining and well written, and offers an intriguing look at social issues like socioeconomic status, public image, and gender roles,” Red City Review wrote.

“This is an intriguing, captivating, inspirational story of a woman who just won’t take “no” for an answer. Marie Pizano is an example of how you can overcome challenges to live with passion and purpose, and realize your ambitions. Her story can help empower and motivate others to fund their ‘yes’,” Jack Canfield said.

Emily Newton is a staff writer for hottytoddy.com and the editor of Experience Oxford magazine. She is a recent graduate of the University of Mississippi Meek School of Journalism and New Media. Emily can be reached at emily.newton@hottytoddy.com.