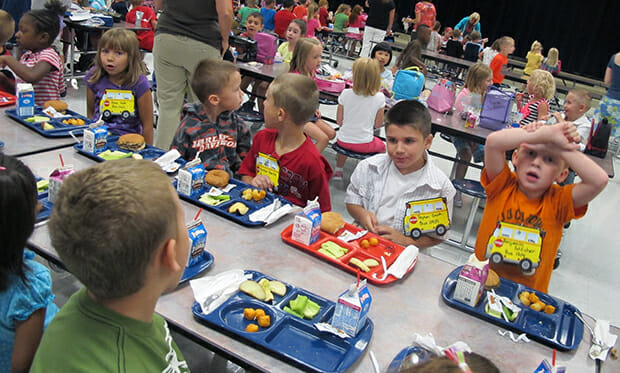 Despite its reputation, Mississippi is leading the way in healthier school lunches

By Kaitlin Howell, Broadcast Journalism Major, Meek School of Journalism & New Media
kdhowell@go.olemiss.edu
Mississippi is well known for its obesity problem; it has the highest rates of obesity in the nation for both adults and children.
What few people know is that Mississippi is also one of the first states to try and improve the nutritional value of the meals children eat in schools.
“The rest of America is trying to catch up with Mississippi,” said Steve Stockton, child nutrition director for the Amory School District. “We’ve noticed we’ve had an obesity issue for years, and we’ve been addressing it and have been ahead of the game and have been making some differences.”
Mississippi schools were quick to take advantage of the Healthy, Hunger Free Kids Act (HHFKA) of 2010. The federal law is helping poverty stricken areas in Mississippi get the money they need to serve nutritional meals to students.
“There’s been tremendous improvement across the board in all schools. The more rural schools with smaller discretionary monies have sometimes struggled,” said Teresa Carithers, a hospitality management and nutrition professor at the University of Mississippi.
“Schools are now seeing an increase in the variety of fruits and vegetables, as well as decreasing in the amount of fried foods served to students.”
The Amory schools are feeling the impact of the program.
“In the last year, we’ve gone to whole wheat, whole grain, low fat, and no salt. It’s a major change,” said Rita Vaughan, cafeteria manager at Amory High School (AHS).
However, as anyone who has ever tried to feed a child knows, it’s one thing to offer healthy food and another to get the child to eat it.
“When you start having to do those whole wheat products on everything, it becomes a little bit more difficult. The children do resist whole wheat hamburger buns and things like that,” said Stockton.
“I like the food the way it tasted last year. This year, it doesn’t taste quite as good,” said John Mark Howell, a student at AHS. Many other students feel the same way, but there are some who don’t have a problem with the changes.
“I think for the most part, they’re pretty good. There’s one day every once in a while when I don’t like anything they’re serving,” said Austin Roberts, another student at AHS.
One challenge created by the new, low-fat focus is meeting the calorie requirement of the HHFKA. Stockton thinks the requirement may have actually made it tougher to give the students nutritious meals.
“What we’ve seen in our menu planning is that we had far healthier menus before the new requirements than we do now because we have to add calories,” said Stockton.
Carithers, on the other hand, says it’s more important to focus the nutrition in those calories, and she believes that school menus are healthier than ever.
“The new meal pattern enhances the healthier options for students and that’s important,” said Carithers.
Back Pack Program
The need for school lunches to be nutritious is even more critical when the student population is poor, as it is in many parts of the state. In the Amory school district, for example, 60 percent of the students are on free or reduced meal plans. For some of those students, school may be the only place that they have an option to eat healthy food.
“On the weekends, they go home and many of them are not going to have a good wholesome meal until they come back on Monday. So, with that in mind, we have started a Back Pack Program,” said Stockton.
During recess, the back packs of participating students are filled with food to help feed them through the weekend. Carithers says programs like these are important.
“Those types of programs that are partnered with the school food service units are actually very valuable in states like Mississippi where we do have pockets of poverty still existing,” Carithers said.
School lunches have long been the subject of jokes and jeers from students, but they’re now playing a big role in helping to grow healthier kids in Mississippi.