The President Writes to Mose 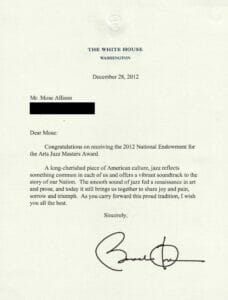 It’s a rarified pantheon of the brightest talents in jazz: Dizzy Gillespie, Count Basie, Ella Fitzgerald, and Herbie Hancock, to name a few. They have all been recognized by the National Endowment for the Arts as Jazz Masters. On January 13 at Lincoln Center in New York City, the NEA added four new names—including Ole Miss alum Mose Allison—to the list with the announcement of the 2013 NEA Jazz Masters.Like the 124 honorees who came before them, these four individuals were recognized for their lifetime achievements and significant contributions to the development and performance of jazz.

After the honorees were announced publicly, but before the regalia of the Lincoln Center event, the Tippo, Mississippi-bred Allison received a letter from President Barack Obama, pictured here, which Allison’s son John Allison shared with HottyToddy.com.

Mose attended both Ole Miss and—we regret to report—LSU, too. Both institutions are mere footnotes in the formative years of a life of incredible talent.