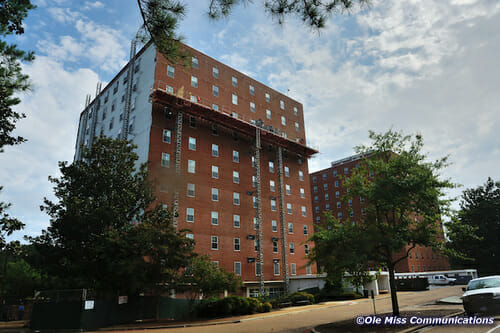 The University is revamping Martin and Stockard Residence Halls to develop a safer environment for the residents, as well as a new look for the dorms.

Jennifer McClure, assistant director in the Department of Student Housing, says construction on the buildings has taken longer than expected.

“When the work begins you can always find things that have to be done additionally to what you have planned,” said McClure.

The university hopes to have the work done in time for the fall 2013 move-in.

Workers are replacing bricks on the buildings that were creating a safety hazard.

“The moisture that gathered caused expansion when frozen, which caused bricks to become loose,” says McClure.

In addition, the buildings are getting a “face-lift” to modernize their facade.

Kristin Banks, a current resident in Martin Hall, says that the dorm’s look was outdated.

“It will draw more people to live in Martin,” said Banks.

During construction, parking spots for the dorms have been eliminated, but McClure said that it had to be done.

“Well, we knew that there would be some parking spaces lost because of the lay down with the equipment that they actually have to have on the grounds and keep at all times. We felt like that would maybe be counter-balanced with the new zoning for the residence halls this year,” said McClure.

Other inconveniences include the fact that workers have to enter student’s rooms in order to replace the windows, but that doesn’t bother every one.

“I feel like the housing department has made it safe when workers come inside of the residence halls,” says Tisha Coleman, a current residential assistant in Martin.

Coleman also says what dorm residents are going through is not all that unusual.

“We are one of many schools that do construction while residence are living in the building.”

The total cost for the exterior improvements on the buildings is $4.9 million. In the end, McClure says the results will be worth it.

For more information on the dorm construction, please visit http://www.olemiss.edu/depts/stu_housing/index.html.