Poor, Uprooted and On the Margins 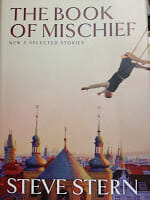 When the one-legged, one-eyed rags peddler Lazar Malkin left on his journeys into the Mississippi hinterland to find customers for his collection of “shmattes and tools,” he liked to remind his fellow Jews on Memphis’ North Main Street, “The Pinch ain’t the world.”

Old Malkin was right, but he was wrong, too. The Pinch, the former Jewish quarter of Memphis, Tenn., located along North Main between Downtown and Uptown, was, after all, a world unto itself. Along with its “jewelers, tailors, and watchmakers,” its Hasidim, rabbis, meshuggener and various luftmensch, were Klotwog’s Feed Store, Rosen’s Delicatessen, Ridblatt’s Bakery, Hekkie’s Hardware, the Neighborhood House, and the Anshei Sphard Synagogue.

It’s the world you enter in writer Steve Stern’s wonderful collection of short-stories The Book of Mischief (Graywolf Press, 2012), a lost world, that perennial of Yiddish literature, that existed in a little corner of a Deep South city, a threatened world where “at night rabid animals stalked the perimeter … with now and then a werewolf among them; and never mind the marauding Klansmen” who’d taken the place of the Cossack troops that tormented these Jews back in Russia and Poland’s Carpathian Mountains.

Stern, a winner of the National Jewish Book Award and teacher at Skidmore College in upstate New York, spent formative years in Memphis and found in the Pinch District—now largely blighted but possibly facing a rebirth–a bottomless source of inspiration.

The Pinch is Memphis’ oldest neighborhood. It was here where Davy Crockett and Sam Houston caroused at the old Bell Tavern in the early 1800s, where waves of Irish and German immigrants came and worked along the nearby levees of the Mississippi River, where many of them perished or fled during the 1878 Yellow Fever Epidemic that nearly destroyed Memphis.

Jews from Eastern Europe and Russia settled in the Pinch after the epidemic. They came here just as they came to New York’s Lower East Side and other places of refuge to escape the pogroms launched against them after Czar Alexander’s assassination in St. Petersburg in 1881.

This collection of Stern stories also includes tales from New York’s Lower East Side, the Catskills Mountains, and Eastern Europe, those shtetl and city ghettoes we know mainly today through “Fiddler on the Roof”, the paintings of Marc Chagall, the haunting pre-World War II photographs of Roman Vishniac, and the tales of Isaac Bashevis Singer.  Stern revisits the horrible last moments of the immigrant women at the Triangle Shirtwaist Factory in New York just before it goes up in flames in  1911. He juxtaposes the world destroyed at Auschwitz and Treblinka with today’s Prague, where that most iconic of Jewish writers, Franz Kafka, has become “Elvis”. His “jug ears stretched to satanic points … the forehead receding to a vampirish widow’s peak,” Kafka is everywhere—in the windows of bookstores and cafés, on T-shirts and coffee mugs.

Stern quotes Kafka to get to the heart of things Jewish: “In us all still lives—the dark rooms, secret alleys, squalid courtyards, and sinister inns. The fetid old Jewish town within us is more real than the hygienic town around us. With our eyes wide-open we walk through a dream, ourselves only a ghost of a vanished age … ”

And one “old Jewish town” was to become the Pinch District of Memphis, Tenn. Here along its alleys and narrow streets were refugees from a distant and hostile world, eternal wanderers it seemed, who now must contend with “a river … awash with dead men and snakes. Beyond our neighborhood the poor people married their own mothers and had two-headed children. For sport they wrestled pigs and cut the private parts off Negroes, which they framed and hung up in the barbershops. The South beyond the Pinch was Gehinnom, it was Sichra Achra, the other side.”

As is obvious here, Stern has a Jewish sense of humor, and it’s no accident he spends some time in this book in the Catskills amid the ghosts of “Sophie Tucker … Fat Jackie Leonard, Danny Kaye né David Daniel Kaminsky.” In his story “The Wedding Jester”, his character Saul Bozoff may be Stern himself, a curious Jewish Southern writer who discovered in the Pinch a haunting of ghosts–“immigrants crying hockfleish and irregular pants, pumping their sewing machines like swarming hornets in the tenement lofts, braiding Yiddish curses into their yellow

Or preparing for the occasional visits of Memphis’ political czar, Edward H. “Boss” Crump, who would boast “Our sheenies are good sheenies” with just the hint of a threat behind that frozen smile and “rakish straw skimmer.”

These stories are filled with golem, dybbuks, tzaddik, and there’s even a daughter of Lilith, the original “femme fatale,” Jewish, of course, a succubus as dangerous as she is seductive. Stern takes you to fantastical heights that require the suspension of Gentile logic and practicality. You fly in the air with Rabbi Shmelke “above the telephone lines and trolley lines” of the Pinch. You accompany Zelik Rifkin into a dream world of Pinch District doppelgängers who exist just above the tallest oak in the quarter. You swing with Felix Meltzer over the rooftops of Prague as he escapes the golem.

Stern tells us Saul Bozoff, the writer in “The Wedding Jester”, was never to be a bestselling author, lost as he was in “the place where history and myth intersected,” a writer “saturated in Jewish arcana” whose books are “catalogued as Fiction/Judaica.”

As literary critics Irving Howe and Eliezer Greenberg once wrote, the writers of Yiddish or Yiddish World literature, “virtually unknown to Americans,”  navigate a world that is “internally a community, a spiritual kingdom,” and “externally a society in peril, a society on the margin.”

Indeed, by and large, these are poor immigrants, dealers in rags and legends, refugees from oppression defiantly true to their faith and culture yet also fearful of those outside their world, the holders of power in whose smiles lies an ever-present threat of bad things to come. Yet what stories these lost world denizens have to tell. –– Joe Atkins, professor of journalism, Meek School of Journalism and New Media