Khayat Tells Story That Needs To Be Told

Robert Khayat’s “The Education of a Lifetime” is a revealing template on the power of effective leadership and courage in the face of inexorable opposition. The 309-page memoir tells a story that gives Ole Miss insiders a closer view of the deliberative process Khayat employed in a racially charged environment so contentious that, at times, it easily could have created permanent factions. The takeaway of the story, which mildly celebrates triumphs but isn’t told boastfully, is that the Ole Miss that exists in 2013 would still be years behind without Khayat’s time in the chancellor’s office from 1995-2009. He gives himself no credit, but it is clear that he is the unnamed hero of this story.

“The Education of a Lifetime” deals head-on with the complexities of leading an organization with multiple parts and people who are ideologically worlds apart. The premise of this compelling work can be put into a few words: Effective leaders are not always popular, but effective leadership can progressively take people to places they never would have ventured on their own. Although Khayat spends no time wallowing in self pity, the loneliness, the stress, the frustration of leading an institution away from vestiges of its past are evident throughout.

His “Education of a Lifetime” is a revealing characterization of how he came to be Robert Khayat: Chancellor, borrowing lessons from his mother who painstakingly and meticulously ran the family household and from his local politician father who built myriad relationships only to be stripped of his pride after a fall from grace. Khayat’s childhood in his native Moss Point provides an important backdrop that some will unfortunately miss. He attended segregated schools his entire life, including an all-white Ole Miss in the late 1950s, even though he spent his childhood in Moss Point playing with African American children.

His comfort with and respect for African American people is a part of this work that serves as the underpinning for Khayat’s biggest challenge at Ole Miss. One by one, often at the urging of his coaches, Khayat dismantled symbols that were beloved by white students and alums alike. The Confederate flag, flapping and twisting on many football nights, was one of his first targets. The flag had long been associated with a Southern history that African American students and black Mississippi residents found painful. When Khayat decided the flag had to be removed, his actions were viewed with a vitriol that put him in the same emotional state as the African American people offended by it.

Khayat’s “Education of a Lifetime” is an intimate portrait of a man who carefully sprinkled pieces of his personal life to help the reader understand his unpopular stands against anything he viewed as detrimental to Ole Miss. How he governed Ole Miss does not stray far from his upbringing as a kid growing up modestly in Moss Point. Sports serve as a metaphor for his resolve in staring down hate. Sports taught him how to win, and how to lose. Perhaps the import sports brought to this story is that they taught him how to get up when knocked down and to never accept losing, even when adversaries (see references to Big Daddy Lipscomb) seemed bigger, stronger and faster. At Ole Miss, some of the adversaries, friends and acquaintances he would have expected to be supportive, turned on him. He felt great disappointment when they failed to see how Ole Miss was harmed by divisive images.

In true Khayat form, “The Education of a Lifetime” skirts the edge of it but resists taking the path of negativism. Instead, it showcases an intellectual, almost methodical approach toward solving daunting problems, which seemed to come frequently and often unexpectedly. That he made it to the chancellor’s chair is an amazing story. He was urged by colleagues to apply for the chancellor’s position, but nearly rejected that idea, still stung from being passed over earlier for the dean of the law school. (One small disappointment in that passage is the unnecessary mention that he was passed over for a “minority”). For those who know Robert Khayat, the book completes a story that needed to be told, if not for him, then for history and those who will one day study how modern-day Ole Miss came into existence. The reader comes to understand that, willingly or unwillingly, Khayat was thrust into situations that many who held the chancellor’s seat before him avoided or ignored.

The story makes it abundantly clear why Khayat was so obsessed with everything about Ole Miss, from the physical appearance of the campus, to the persistent pursuit of a Phi Beta Kappa chapter, to building an endowment that would place the university on firm financial footing for years to come. They were all pursuits that did not come solely in adulthood, but throughout his entire life. Every relationship, from boyhood and college friendships to professional ones, was maximized. The people who struggled financially as college students, the ones who went on to make millions in private business, would all prove to be important pieces to Ole Miss’ later success. They were his friends, but Khayat made sure that they translated their love of Ole Miss into financial contributions that led to an endowment worth more than $400 million. New buildings and programs bearing some of their names sprang up on the Ole Miss campus like flowers in his mother’s immaculate garden.

Although they see the results, it is doubtful that today’s students, or even tomorrow’s, will fully grasp the impact Khayat made during his years in the chancellor’s office. The shiny new buildings they travel past each day were designed to sit in harmony with their older 100-year-old neighbors. Even the  minutiae of traffic flow and parking access have Khayat’s fingerprints on them. The monument to James Meredith, Ole Miss’ first black student, the eventual awarding of a Phi Beta Kappa chapter, the retirement of Colonel Reb as a mascot, the impressive increase in black student enrollment and the intangible, the open door that greets all visitors, all point to Khayat’s vision of taking a university viewed in some circles as average and setting it on a path to greatness.

Today, visitors to Ole Miss gaze in awe at the picturesque campus setting. Today, black students no longer are faced with offensive symbols of the past and have found their place among the university’s brightest. “The Education of a Lifetime” brings home the point that in order to win, you have to be willing to lose. It shows that in pursuing victory, one cannot fear defeat. Thrust into a place at a time not of his choosing, Khayat made unprecedented progress, well-chronicled in this memoir.  It is impossible for Ole Miss to be what it was in its former years. “The Education of a Lifetime” gives valuable insight into reasons Ole Miss has undergone one of the biggest transformations in higher education history. It is one thing to fight for academic excellence. It is another to fight for principle. And it is yet another to take on deeply held beliefs and traditions that serve to divide rather than unite. Khayat took them all on, and in “Education of a Lifetime” we get a front-row seat to marvel at how he did it. 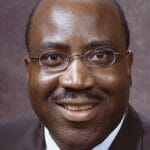 Ronnie Agnew, a former executive editor of The Clarion-Ledger, is the executive director of Mississippi Public Broadcasting. He is a 1984 journalism graduate of Ole Miss. In 2008, Ronnie was named the 50th recipient of the Silver Em award presented by the journalism school. In 2003, he was inducted into the University of Mississippi’s Alumni Hall-of-Fame. Among many honors, Ronnie is a four-time judge for the Pulitzer Prize, and a champion for diversity in America’s newsrooms.