Ron Borne: “The Wall is Crying Too” 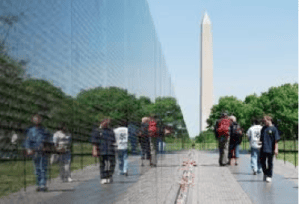 Previous portions of this story have been published before but with Veterans Day approaching memories of a trip I took to the Vietnam Wall Memorial several years ago are especially significant.

Having never served in our military (unless one counts serving two years in mandatory Army ROTC) because of circumstances and timing, I, like historian Stephen Ambrose, will always wonder that if I had been involved in combat would I be a hero or a coward. Several years ago, on a business trip to Washington DC, I visited the Vietnam Memorial in a persistent, steady drizzle. It was Veterans Day.

Those who have visited this site know that the Memorial begins from its east side with a death-black marble wall beginning below knee level and a walk down a long, black tiled slope Only one or two names appear on the wall as the roll call begins, but as one moves down the slope, the marble slabs containing the names of those killed in the war grows larger and larger and the feeling of sinking into all of the pain and misery of this war begins to overwhelm you. At the mid-point of the Wall, the marble slab reaches a height of 9-10 feet and you are surrounded by the names and memories of those who lost their lives in this still poorly understood waste of human lives. Despite my height I felt dwarfed by the size of the Wall, overwhelmed by the feeling that I was trapped by the past.  The Wall precisely and exactly captures the situation the U.S. had found itself during those days.  We were caught in that war and could not get out.  The drizzly rain continued.

Earlier in the day a ceremony in honor of these men and women who lost their lives in this, and other wars, had been held here. The mats on which three U.S. Senators had spoken were still in place and directly above was a rain-soaked American flag made from 58,183 flowers, mostly yellow roses – one for each of the names on the Wall. I was stunned by the sight of hundreds of people, some with umbrellas, most without, some just standing, while others barely moved along the walk. Many wore military combat fatigues or ponchos -much as they wore in Vietnam. Every few yards or so a group of veterans stood together, or embraced each other, staring at this Wall as if they could look nowhere else. Most were crying.

At the base of the entire Wall were water-soaked tributes to those whose names appeared on the panels.  Roses were placed between the walk and the Wall and in the cracks that separated each panel of names. Four men dressed in Army combat gear stood ahead of me looking for a name. When the name was located, one of the men reached up, placed a yellow rose in the space between slabs on the same line in which the name appeared, stepped back, and embraced the other three. All four began to sob in short, painful, soft moans. It was easy to get caught up in the emotions of the moment and I began to observe more closely what was really happening around me. A feeling of guilt that I had somehow managed to avoid the pain and misery of combat that these names experienced hit me. The sight of men and women holding the hands of young children standing at a spot before a name, weeping, did not help my depression.

The rain had condensed on the wall making it difficult to read the names. A young girl next to me wiped the water from the Wall and told her mother, “Look Mama, the Wall is crying too.”

The base of the Wall served also as a collecting point for many other souvenirs- a pair of combat boots, a green beret, a white plastic dove, a letter from a mother to her dead son, hundreds of American flags, a book entitled “Piece of My Heart-The Story of Twenty-Six American Women who Served in Vietnam” -each obviously at the spot at which the name of their lost loved one appeared among the thousands on the wall.  In the background, the theme song from “Chariots of Fire” eerily blared from a loudspeaker on the plateau above the wall. Further along the walk was a photograph of a young soldier named Mosher taken somewhere in the jungles of Vietnam. Alongside the photo was a rain-soaked but still readable note signed by Doc Johnson, that read, “He was killed in the war -I still don’t know what for.” Not far away was a small piece of shattered, rusted metal. A note resting on the top of this chunk of metal indicated that it was part of the wreckage of a B-52 bomber that had collided with a fuel tanker during a refueling maneuver, apparently killing all on board. The card, and the piece of metal,had been placed there by the son of the navigator of that B-52. Nearby was a large floral wreath of yellow roses draped with a green and yellow banner “From the Sons of Notre Dame.”

Volunteers stood every few yards assisting visitors with directories containing the locations of the names on the wall. I knew several of the victims of this crazy war very well.   Billy Wilson, with whom I had worked years before, had been killed early in the war as his jet crashed into the side of a mountain.  Several years ago I coached my brother, Barry, on an 11-12 year-old football team in Harahan, a suburb of New Orleans. Two of those little kids, our quarterback, Meano Ragland, and our wide receiver, Randy Heath, who lived next door to my brother, had joined up. Randy joined the Army and tried to get my brother to go with him. Fortunately, Barry resisted. I asked one of the volunteers if he could help me find their names. After skimming through several pages he found “Mason E. Ragland, PFC, U.S. Army, Harahan, LA-killed in action April 25, 1970”.  Following directions I went to slab 11W and counted down 52 rows. Wiping away the drops of rain, I found Meano’s name and rubbed my fingers back and forth over it for a long time. I did the same when I found Billy’s and Randy’s names. I wanted to cry as the others had, but I am one of those taught to never cry.  Real men don’t cry, I was told.  Instead I prayed that the lives of my children, or my grandchildren to come, or the children of my good friends, would never be wasted only to have their names appear on a wall like this one.

A few years later I revisited the Vietnam Wall after making my first visit to the World War II Memorial in the Mall.  Although this new memorial is impressive, to me it does not carry the emotional impact of the Vietnam memorial.  Despite the heat I walked to the end of the Mall to the Vietnam Memorial. On this day there were few visitors, few memorabilia left at the base of the wall.  However, I did find this note from a 12 year-old boy:

Thank you for serving in the Air Force for our country’s freedom. I wish I had met you.  I’ve heard so much about you.  My mom told me you earned a Purple Heart for your bravery.  My grandmother showed it to me. I look forward to meeting you in heaven one day.

–A New Orleans native, Ron Borne is a medicinal chemist by experience, and an amateur writer by avocation.  He served Ole Miss and the School of Pharmacy as a teacher, researcher and administrator for more than 40 years and is now “retired” and living in his center of the universe. Email him at  rfborne@yahoo.com.