Grab the Mouth Soap: Mississippians Among Most Prone to Profanity

When it comes to potty mouth talk, Mississippians are in the same category as sailors. 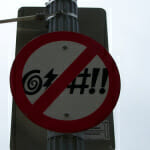 At least that’s the view of Washington State’s Marchex Institute, a collection of data scientists and senior analysts who deliver customized reports and insights for clients of the “call marketplace” and “call analytics” sectors.

In other words, they tell those annoying telemarketing callers what to expect in calling certain states. Ohio, Maryland, New Jersey, Louisiana and Illinois are rated the five most likely to curse like sailors. But Mississippi is ranked right in with the slightly more than one dozen “sailor” states.

Oddly enough, neighboring Arkansas has the distinction of being a “goody two shoes” and Alabama and Tennessee are tagged as only “occasionally profane.”

Here’s where it really gets weird: Texans are ranked as the fourth least likely Americans to curse.

Marchex Institute researchers also note that being prone to profanity does not necessarily make you rude. While Louisiana and Maryland are solidly entrenched in the cuss-like-sailors category, they also have the distinction as being among the top five most courteous states.

That would be South Carolina, which under the profanity gauge ranks only as an “occasional” curser. The saving grace of the South Carolinians, according  to the survey, is their propensity to use the magic words “please and thank you,” terms the Marchex data miners sought out in compiling their rankings.

The award for the least courteous – the envelope please –goes to Ohio. Incidentally, Ohioans are the most likely among all Americans to resort to profanity, the survey says.