In a press release, Megabus.com announced Tuesday that routes between Oxford and New Orleans are now available and cost a little as $1. For more information about booking, schedules, accommodations, and Megabus, read the full press release here: 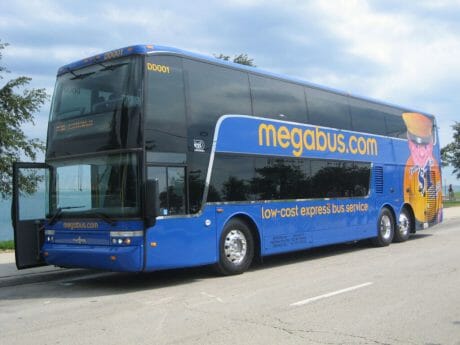 Megabus.com, the popular city-to-city, express bus company with fares from $1, launched its expansion to Mississippi today with services to/from Jackson; as well as Oxford.

Mississippi residents are now able to travel express between Jackson, Oxford, Memphis and New Orleans for as low as $1 on three daily arrivals/departures. The launch into Mississippi marks the 33rd U.S. state in which megabus.com operates; plus the District of Columbia and the Canadian provinces of Ontario and Quebec.

“Megabus.com has rapidly become the travel option of choice for more than 30 million people and today we’re excited to bring our unique travel option to residents of Mississippi,” said Mike Alvich, VP of Marketing and Public Relations for megabus.com/Coach USA. “As Americans continue to look for ways to stretch their dollar, we look forward to providing safe, convenient and affordable travel to the hundreds of thousands of Mississippi residents while providing Memphis and New Orleans additional service options.”

“Customers can travel to these popular destinations in approximately the same amount of time it would take to drive themselves, without the stress of being behind the wheel,” added Alvich. “Customers can recline, rest and even sleep, or, if they prefer, keep themselves connected and entertained with free Wi-Fi and power outlets in every seat on our state-of-the-art double-decker buses.”

Customers are encouraged to book early to secure the best rates.

“The $1 fares go quickly, but there are many other great fares available if you book early,” said Alvich. “Traveling on Tuesdays, Wednesdays and Saturdays is another great way Mississippi customers and all travelers can secure the best megabus.com fares.”
Megabus.com, a subsidiary of Coach USA, launched in April 2006 and is one of the largest city-to-city express bus service providers in North America. In addition to affordable fares, megabus.com offers customers state-of-the-art, green-certified double-decker buses with free Wi-Fi, restrooms and are wheelchair accessible. Megabus.com has equipped every bus purchased since 2006 with three-point lap/shoulder seat belts, providing the top safety standard for megabus.com’s 30 million passengers in more than 120 cities across North America.

Visit www.megabus.com for additional information about the service, schedules, arrival and departure times and fares.

Megabus.com, operating in 33 states in the USA, the District of Columbia and two provinces in Canada, is one of the largest privately funded providers of city-to-city express bus transportation. Megabus.com serves more than 120 cities in North America, including routes operated by other Coach USA subsidiaries.

Service for megabus.com operates daily. Fares shown are one-way and include all government taxes. Each year megabus.com carries 10 million customers safely on more than 200,000 trips using the most modern fleet of double-decker buses on this continent. Since its launch on April 10, 2006, megabus.com has served more than 30 million travelers. For the latest news and travel deals, follow megabus.com on Twitter at @megabus and Like us on Facebook at http://www.facebook.com/megabus.com.officialpage.

Megabus.com is a subsidiary of Coach USA, one of the largest transportation companies in North America, and maintains the highest safety compliance rating (Satisfactory) from the US Department of Transportation’s Federal Motor Carrier Safety Administration. Paramus, N.J.-based Coach USA owns and operates 30 local companies in North America, some that have been in business for more than 70 years, which operate scheduled bus routes, motor coach tours, charters and sightseeing tours.

Additional safety information can be found in the video here: http://youtu.be/lUOa48278mM

Ole Miss Heads to the Sugar Bowl to Face Baylor