The wildly popular “pop-up” dinner series hosted by City Grocery returns in January 2014 with a similar array of talented chefs, but this time with a mission.

Rodney Scott, pit-master at the BBQ joint under the same name in Hemingway, South Carolina, suffered a tragic pit-house fire this past November, which wiped out his in-ground pits. Scott, the ever ambitious workhorse, brought in pit trailers to immediately get the restaurant back up and running, but rebuilding costs for the original structure proved to be overwhelming.

A group of close friends within the industry, affectionately known as the Fatback Collective, saw the opportunity to help their friend. The result is the “Rodney Scott In Exile” Cooking Tour. Scott will stop in Nashville, Tenn., Oxford, Miss., New Orleans, La. and Atlanta, Ga. before finally returning to Charleston, SC to wrap up.

The City Grocery pop-ups, happening each Monday in January at City Grocery, will extend the reach of that tour and raise more money for their mission.

“We just had a number of friends who wanted to do something to help, but Rodney could not stop everywhere, so we decided to have the pop-ups again so we could involve as many folks as possible,” John Currence of City Grocery Restaurant Group said. “We could not be more excited about having these guys in our kitchen to cook and know they are equally excited about helping the Fatback Collective and Rodney.”

Dinner schedule is as follows:

“To be clear, we are not simply trying to put on fundraisers for Rodney. The funds raised will go the Fatback Fund and will be used to continue doing work within the communities from which each of us makes our living. Rodney just happens to be the person in need at the moment,” explains Currence. “You could make the case that rebuilding Willie Mae’s Scotch House after Hurricane Katrina was the original Fatback initiative. A lot of the same people were involved.”

Sam’s Barbecue in Humboldt, Tenn. was another project several years ago after it burned.

The dinners at City Grocery will be by reservation only. They will be four-course meals, paired with wines. Reservations are $65 per person and include an autographed menu/certificate of appreciation from participating chefs and Fatback members. 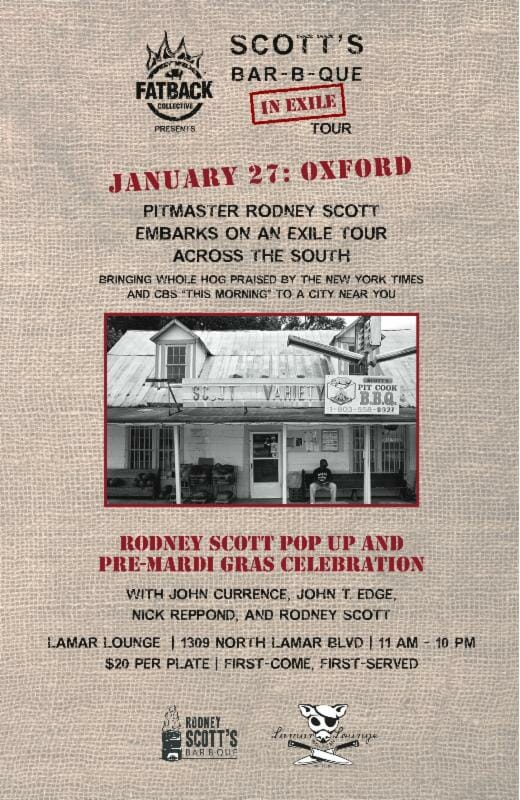