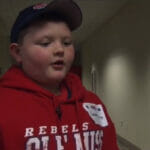 At the Oxford Conference Center, a select group of fans gathered to witness the signings of the 2014 Ole Miss recruiting class.
These fans, better known as The Quarterback Club, rose with the sun, meeting at the facility at 7 a.m. to await decisions from this year’s recruits. Although spirits were high with expectations for the season ahead, many reflected on last year’s outstanding recruiting class and how fan involvement has developed since then.
Long time Quarterback Club member Bruce Welch, said that he remembers the days when membership in the club was pretty thin.
“When we first started coming to recruitment, we used to go to the South Endzone.  It wasn’t near the fraction of the people we’ve got today, so its created a lot more enthusiasm,” said Welch.
Welch says better signees make all the difference.
“With the recruiting class last year we saw a lot more enthusiasm and there was a lot of extra people at the games that we didn’t see before.”
Third-grader and hard core Rebel fan Cooper Long from Tupelo, Miss. said that last year definitely had its perks.
“Last year was the greatest year because I got see Robert Nkemdiche on and off the field,” said Long.
While he enjoyed last season, Long says that this year is what it’s really about.
“I’ve been waiting for new recruits ever since last season. I actually wanted a new quarterback ever since we got more recruits; the quarterbacks can do the best thing ever- they can run, throw and even score,” Long said.
When asked what else he hoped to get out of Signing Day he replied, “I was excited about getting a new kicker.”
And his wish came true.
Ole Miss ended the day with quarterback Kendrick Doss and kicker Gary Wunderlich. Additionally, the Rebels found themselves with a loaded signing class including OG Roderick Taylor, DT Breeland Speaks, and even previous MSU commit, Tee Shepard.
Story contributed by Ole Miss journalism student Christina Sallis — cesallis@go.olemiss.edu.