Freshmen explosion blows next year's sophomores on the street

On January 23, Ole Miss Department of Student Housing announced that on-campus housing would be limited to current students next year, especially sophomores.


This year’s freshman class is 3,579 students strong and total enrollment is up 3.5 percent overall. Needless to say, the student body is growing. While the Department of Student Housing is doing its best to reallocate space for such a large student body, current freshmen still have concerns about next year.
In the official statement released online, the Student Housing Office said, “The Department of Student Housing has developed several strategies to address the increasing demand for on-campus housing,” meaning it is required for all freshmen to live on campus and with the anticipated size of next year’s incoming class—should it be larger than this year’s—there will no longer be room for current students to live on campus.
This largely affects the sophomore sorority members, who typically live in Crosby, and residents of the Northgate Apartments, which from this point forward will be reserved for Ole Miss Opportunity Scholars. “The University should have told us in the fall. They put 500 people out of a home,” said Laney Coker, a freshman sorority member who expected to live in Crosby.
Coker explains that the night that Housing announced the limited housing for next year, her friends found an apartment and she confirmed with her parents the next morning, explaining to them out of panic that she had no other options. While she had very few difficulties finding places to live, she has friends who were not as lucky. “Everything filled up fast. A lot of places could not accommodate so many students and the prices kept fluctuating,” she said.

On the other hand, Chloe Sumerall, a freshman sorority member and Ole Miss Opportunity Scholar, has not yet found her home for next year. The Department of Student Housing asked her, a holder of this particular scholarship for Mississippi residents, to stay on campus next year in the Northgate Apartments. Previously, the request for her to live on campus her sophomore year seemed to be an easy agreement because she expected to live with her friends and sorority sisters in Crosby. Without that option, and without knowing anyone else with the same scholarship, she is concerned about living in the Northgate Apartments.
“I am afraid I will end up somewhere that I am uncomfortable living, which is not an added anxiety that I need,” Sumerall said.
She explained that while most of her sorority sisters plan to live together next year off-campus, she will not experience the bonding that her sisters will.
“I know a lot of girls say they bond over living together,” Sumerall said. “And I think I will miss out on that part of the Greek experience.”
Huntington Maddrey, a male freshman who never intended to live on campus another year, explained that the added pressure of finding an apartment with the extra 500 girls searching as well. “I was able to find a place, but I felt rushed into signing a lease,” he said. “I wasn’t able to properly search and research viable options.”
Many sororities worked to block off sections in different apartment and housing complexes so their girls could still have the option of living together. This situation further restricts the options for those looking for housing, but not associated with a large group.

“All of my primary choices seemed to fill up quickly by large groups who went to find a place together,” Maddrey said. “After this sudden announcement, the ensuing housing frenzy forced my hand into making a premature decision about where I will be living next year.”
The Retreat at Oxford, one of the many housing complexes within a relatively close distance to campus, claims to already be about 80 percent full. Jared Hines, a current employee, said that out of 668 spaces, the Retreat will be completely full by the start of the fall semester for its second year in operation. The number of leases being signed has tripled since the week of Jan. 22 and they will not be able to offer housing to anyone except students.
While many students are currently en route to solving their future living situation problem, there are more issues that still stand. Ann Louise Seabrook, another freshman sorority member, is mostly concerned about transportation next year. She said she is worried about getting to class on time with so many students suddenly living off campus and having to park.
“The idea of such an unclear future due to the failed planning of UM Housing really makes me nervous about next year,” Sumerall said.
Students react, positively and negatively, on Twitter to the sudden housing changes. 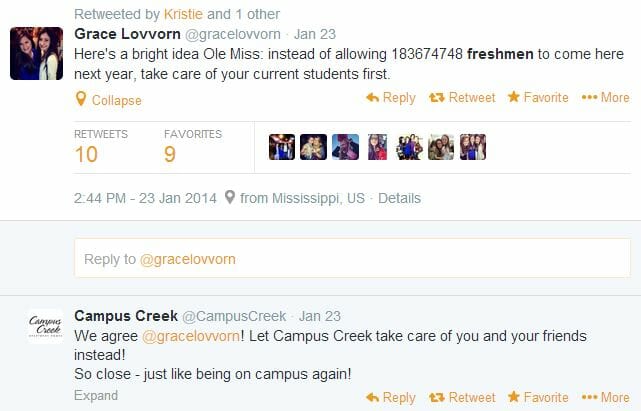