There is no question the Mississippi Delta has played an important role in the American story. It gave our country the Blues and Blues music gave birth to rock and roll, R&B, and contributed greatly to jazz and country along the way. The Delta also played a significant role in the civil rights revolution that changed all of America. 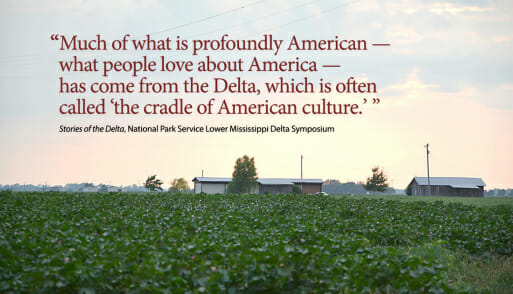 Our region of the state is also the birthplace or stomping ground of writers like Tennessee Williams, Shelby Foote, William Alexander Percy, and Richard Wright. It’s where Teddy Roosevelt didn’t shoot the Teddy Bear and where William Faulkner learned about the conflicts between man and nature. It’s the birthplace of Archie Moore, Archie Manning, and Morgan Freeman.
It’s the place destroyed by the Mississippi River Flood of 1927 setting the Army Corps of Engineers on the path of what they call “Project Flood,” the model for flood control on the Mississippi River ever since that catastrophe. It’s where a critical battle of the Civil War decided who would control the Mississippi River and what Abraham Lincoln called “the key” to winning the war.
And, of course there are many other ways in which the Mississippi Delta created the America we know today, from its production of cotton and other crops, through its production of powerful politicians, journalists, community activists, and even chefs, to its massive contribution to the current populations of Chicago and Gary and Detroit, among others.
We now have a new stage on which to present these stories from the Delta and it is called the Mississippi Delta National Heritage Area. All National Heritage Areas are created by Congress and link geographic regions with the National Park Service, which provides credibility, funding, and expertise. The Mississippi Delta National Heritage Area has been created with the support of Senators Cochran, Wicker and Congressman Thompson and it was signed into law by President Obama in 2009. The law defines an eighteen county area governed by a fifteen member Board. That Board has spent the last several years crafting a federally mandated Management Plan with the help of a team of consultants led by the National Trust for Historic Preservation.


As part of the planning process, public meetings have been held from Vicksburg to Southaven and from Greenville to Greenwood. Opinion surveys were conducted, people interviewed, and hundreds of others sent in comments, photographs, and suggestions. Over fifty Delta entities have written letters of commitment pledging their partnership and helping ensure success.
The Management Plan describes what the Heritage Area will do, how it will pay its bills, and how it will be governed for the next decade. It summarizes the Delta’s stories through five themes: the River and the Land it produced, the Culture of the Blues, the Struggle for Rights, the Wellspring of Creativity, and Building Communities.
The strategies for implementing these themes include “Saving places and perpetuating culture, building the network of partners, and telling the Delta’s stories.” These strategies will engage the Heritage Area in historic preservation, collection of archival materials, promotion of the Delta’s living traditions, and educational and interpretive efforts. Soon, people entering the Area will see large brown and white signs welcoming them to the Mississippi Delta and identifying it as part of the National Heritage Area system.
As time passes, there will be new interpretive guides, support for festivals and workshops, new school curriculum focusing on the Delta, and even a certified tour guide program. And, as a partner with the National Park Service, the Heritage Area will participate in many of their programs and be promoted through their web sites and advertising materials.
Our country has fifty National Heritage Areas, and Mississippi is fortunate to have three: The Mississippi Delta, the Mississippi Hills, and the Mississippi Gulf Coast. All of these go through the same planning process, and currently our Delta Management Plan is being considered by the several Washington, DC offices that must approve it.

By mid-summer, it will be signed by the Secretary of the Interior and we will be fully authorized and completely funded. That means the people of the Mississippi Delta will have new opportunities to tell their heritage stories to the World. It also means the traveling public will have new reasons to make certain they visit the Mississippi Delta and when they do they will learn how important the Delta is to the American story.
They will also learn how friendly Delta people are, how great Delta music sounds in a real Delta juke or night club, and how wonderful Delta food is when eaten in a real Delta restaurant. And, hopefully they will leave some of their dollars behind when they go! The Mississippi Delta has stories to tell of great significance and the Mississippi Delta National Heritage Area will do its best to make sure the people of the Delta benefit from their heritage.
The Mississippi Delta National Heritage Area is managed by the Delta Center for Culture and Learning at Delta State University in Cleveland. For more information on this great new Delta asset, call the Center at (662) 846 4311 or visit is www.msdeltaheritage.com.
The Mississippi Delta National Heritage Area: good for the Delta = good for the state!
– Scott Coopwood is the owner and publisher of Delta Business Journal, Delta Magazine and The Cleveland Current. He can be reached at scott@coopwood.net
Facebook
Twitter
Pinterest
Previous articleBLOG: Croquet Tournaments, PGA and Orange Juice Cake
Next articleHottyToddy Man