On Cooking Southern: Bouillabaisse and Chowder 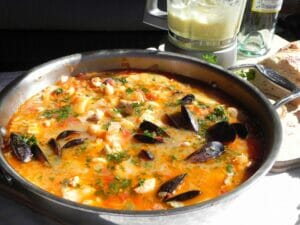 My recipe includes a Provence-style rouille (pronounced roo-EE) which is a garlicky mayonnaise that is composed of breadcrumbs or potato with garlic, egg yolk  and olive oil and usually saffron, and that can contain chili peppers. The rouille can be made ahead and is good up to 4 days (leftovers are tasty on other meats). I recommend making up a bouillabaisse when feeding a crowd in order to incorporate more than two different types of fish and shellfish in the recipe. This truly is a case of “the more the merrier!” To freeze any leftovers, first remove any remaining whole shellfish from the broth because it will become rubbery if frozen. Simply add new shellfish when reheating from frozen.

Prepare fish stock by simmering fish heads and bones with 1 sliced onion and Bouquet Garni in 2 qts water until liquid reduces by half. Strain, discard bones and garni; reserve liquid and bring back to a slow boil.
Rouille:

Boil the russet potato in salted water until soft. Remove and drain, transfer the potato to a blender or food processor. Puree the potato and with machine on, add the egg yolks, minced garlic and cayenne pepper and optional saffron. Puree until smooth, and add the olive oil in a steady stream until just blended. Season lightly with salt. Refrigerate until ready to use.
Bouillabaisse:

(non-oily white fish such as red fish and red snapper)

Juice from one lemon

Heat olive oil in a large Dutch oven, sauté onion, add green peppers, potatoes, and carrots. Cook for several minutes. Add the salt, garlic, bay leaf, tomato paste or tomatoes, and boiling fish stock.  Cover and simmer for 20 minutes. Add fish fillet chunks. Cook 10 more minutes. Add the shellfish and wine, and simmer for 15 minutes. Squeeze lemon juice into the broth and stir.  NOTE *: Remove any unopened mussels from the cooked dish; the jury’s still out regarding food safety.
To serve the bouillabaisse, slather a slice of the bread with a generous dollop of rouille and place it in the bowl. Ladle the bouillabaisse broth on top and add some of the fish and shellfish. Garnish with chopped parsley. YIELD: 6 to 8 servings.
VARIATION: For an authentic-tasting Provencal-type bouillabaisse, add fennel, about a teaspoon of saffron, and a bit of dried orange peel.
MANHATTAN-STYLE CLAM CHOWDER 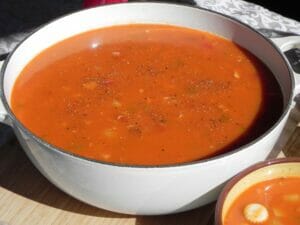 At first glance this recipe resembles a bouillabaisse. But this unique version of clam chowder differs from a bouillabaisse in that it contains ONLY clams, and is built with chicken stock or broth rather than fish stock. NOTE: The recipe calls for fresh clams, but around here, fresh clams are not often available. I have experimented with canned clams, and they’ll do in a pinch, although overnight refrigeration of the finished chowder allows the flavors to blend.

4 slices of salt pork, or thick-cut bacon, cut into cubes

2 or 3 stalks of celery, diced

28-oz can of crushed tomatoes

15-oz can of petite diced tomatoes

Heat olive oil in large skillet and add the cubed salt pork or bacon. As the meat begins to brown, add and sauté celery, onions and peppers until the veggies are transparent but not browned.
Sprinkle flour over this and mix smoothly. Stir in clam juice along with tomatoes, thyme, bay leaf, garlic, and potatoes. Simmer for 10 minutes, stirring to prevent sticking.
Stir in chicken broth and cover. Simmer until vegetables are thoroughly cooked, about 30-45 minutes. Remove from heat and stir in the clams and parsley. Add salt and pepper, to taste. Allow to sit for about 30 to 45 minutes to allow flavors to blend. Reheat, but do not boil, for 5 minutes. YIELD: About 2 quarts.
BETTER VARIATION:  Substitute canned with 2 to 3 dozen fresh clams, scrubbed, rinsed and drained. Put clams in a large stockpot or Dutch oven with a half-cup of boiling water. Cover pot, set it over heat until the steam opens the clams. Remove clams from shells and chop to use. Save all broth and use in the recipe instead of bottled clam juice.
Laurie Triplette is a writer, historian, and accredited appraiser of fine arts, dedicated to preserving Southern culture and foodways. Author of the award-winning community family cookbook GIMME SOME SUGAR, DARLIN’, and editor of ZEBRA TALES (Tailgating Recipes from the Ladies of the NFLRA), Triplette is a member of the Association of Food Journalists (AFJ),Southern Foodways Alliance (SFA)  and the Southern Food and Beverage Museum (SOFAB). Check out the GIMME SOME SUGAR, DARLIN’ web site: www.tripleheartpress.com and follow Laurie’s food adventures on Facebook and Twitter (@LaurieTriplette).