BLOG: I married a Rebel. Now what?


So, as I begin this post, let me make this important side note, this was pre-Rebel love for me, okay?
Picture it, March, 1999, Pass Christian, Miss., newlyweds driving up to our brand new home after a week long honeymoon in Gatlinburg, Tenn. I was so excited! This was it! This was our new beginning in our new home, together, forever!
I was excited to be home, (out of the mountains) and even more excited for what came next! Ladies, you all know what I am talking about, the moment we all dream of, the carrying of the bride over the threshold!
I was all giddy with expectations of him whisking me away into our home and the closer we got, the bigger my smile was.
The anticipation was killing me. I thought it was killing him too since he was driving a tad (okay, more than a tad) over the speed limit the closer we got to home.
He sped into the driveway and he was in such a hurry to get out of our car; I thought he was so excited to carry me into the house too…I thought “here comes my soap opera moment!” Cough, cough!
Well, ladies, wait for it…
And wait some more and some more, because I sure did.
He ran around the front of the car so fast, put the key into the door, slung the front door open and never looked back! Not once! He never looked back.
Men, are you laughing yet?
He ran straight to our television and turned the Ole Miss Basketball NCAA Tournament on because apparently they had a minute and a half left in the game.
I was still in the car. He went inside without me! (Gasp!) I could see the living room and television from our carport in which I was sitting in waiting to be carried over the threshold.
I watched him with his hands clasped behind his head, pacing back and forth with each basket scored. I watched his head move side to side as the ball moved down the court, I could see him jump up and put his fist in the air getting into the game. I didn’t miss a single move he made as I sat in the passenger seat of the car, waiting, and watching.
For the record, let me state that a minute and thirty seconds can be like 22 minutes and five seconds in a basketball game, you understand, right?
Especially if you are a new bride that thought she was going to be whisked away by her man because he was so excited to carry her over the threshold.
Wait for it…you know it is coming…eventually, like after the game was over, he turned around and saw me sitting in the car, still. “Uh-oh ” was probably his first word in his head, but out of his mouth came “I thought you were inside!”
Probably not the best choice of words, but followed by his actions, I don’t know what he could have said that would have made that any better. He kept saying “but honey, it was the NCAA tournament…only a minute and a half left…”
Oh Lordy! Lordy! I thought what have I done? What have I married? Well, y’all, I MARRIED A REBEL!
I am laughing as I am typing this because it is really funny, now. Definitely not then, but really funny now!
I love my husband dearly and, of course, he picked me up and carried me over the threshold…but y’all, I have never let that one go! And I don’t think I ever will! (wink, wink!)
I get a good handbag every now and then when I remind him of that night!
So, the moral of the story here, and the advice he would certainly give any of you Rebels getting married in the near future, “Don’t get married during March Madness!” And I highly recommend that too!
After fifteen years of marriage to a die-hard Rebel fan, I get it! I totally get it! And every basketball season, yes, y’all, when there is less than two minutes left in the game, you know I always ask him to do something…he looks at me and laughs! It’s kind of “our thing!”
After the game, he is always more than willing to do whatever it is I asked him to do! And respectfully, I wait with a smile as I remember way back when, when it all started, when I realized I really, really married a Rebel!
By the way, Ole Miss won! (And for the record, it was their first NCAA Tournament victory!) I really would have hated my husband to miss that! Hotty Toddy, Gosh Almighty! 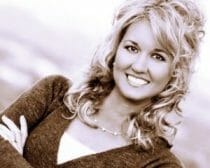 – Lori Weatherly is the proud wife of a Rebel and proud mother to three little Rebels, two that she gets to take to Ole Miss ball games and one that has a special “Hotty Toddy” room in heaven. She is the author of “Facets of Life; What I Didn’t Expect When I was Expecting.” Her work includes sharing her personal journey of child loss through writing and speaking as well as her hand painted, inspirational card line. She has a passion to help others and a most special place in her heart for adoption. Her website is LoriCWeatherly.com.
Facebook
Twitter
Pinterest
Previous article
One Day, 10,000 Steps: Can this Mission be Accomplished?
Next article
Oxford Weddings are always Red and Blue affairs