Sharen's Story: From a Life Altering Challenge to Being Called up on Stage With A World Class Pianist!

Charlie Adams is an Oxford native, graduate of Lafayette High School and a member of the Ole Miss Class of 1985. Adams is a journalist, author, and motivational speaker.
A major goal of mine when I speak and write is to share stories with you that inspire you to keep battling. There is so much negative news reported today, that we often don’t hear of how many positive things are happening out there!
Here is a very special story of a ‘goosebumps’ kind of experience a friend of mine named Sharen experienced. Sharen and her sister and mother were on a group inspirational trip I hosted to Branson.
Sharen graduated from Grace College in Winona Lake, Indiana with a degree in music and a graduate degree in special education. She taught special ed for 37 years as well as teaching piano lessons. Oh, how she loved the piano! In August of 2003, early in another year of teaching school, she woke up and didn’t know what day it was that day. It wasn’t long before she was diagnosed with encephalitis, a rare condition which in her case really affected her short term memory.
She had to retire from teaching, and reteach herself to do so many things. Ironically, with her severe and profound students she would break things down into steps. She used that same technique for herself.
Sharen didn’t play the piano for a few years. She lost her husband in 2010, but she kept plugging away in life. She exercised her mind by doing Sudokus, word puzzles, and jigsaw puzzles, and her personal faith was important to her.
“Sharen always trusted the Lord,” her sister Sue told me. “She had memorized Bible verses so when she lost her short term memory she still had those verses and they were of great comfort. It wasn’t something that she had just read, which she would have forgotten. Her positive attitude also meant so much. She has always been so optimistic. She always says, ‘I will have a good day because I choose to have a good day.’
While in Branson on that November 2012 trip, we went  to seeDino’s Christmas Extravaganza in Branson. Dino Kartsonakis is known as America’s Piano Showman. From Carnegie Hall, to the honor of being the only person to ever perform inside the Tower of David, Jerusalem,.Dino is one of the best. A two time Grammy Award nominee and one time Grammy Award Winner for “Chariots of Fire,” he had started playing when he was 3. 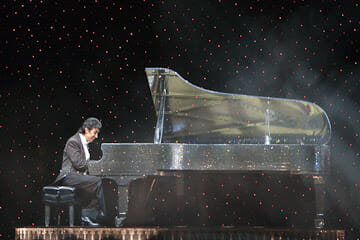 Edgerton’s had arranged great seats down front. We were sitting there enjoying his wonderful show when he came to a part that included a guest. Of all the people in that huge theater, he just happened to pick Sharen to come up on stage.
“I was quivering I was so excited,” said sister Sue as Dino walked Sharen up on stage.

Using the old piano he had learned to play on at age 3, Dino sat next to Sharen as they started playing. Slow at first, they ripped into piano duets as the audience applauded. Even though I wasn’t supposed to videotape inside his show, I jumped up with my video camera to capture this moment. At the end, Sharen got a beautiful gift bag from Dino and a lifelong memory that even encephalitis can’t touch. 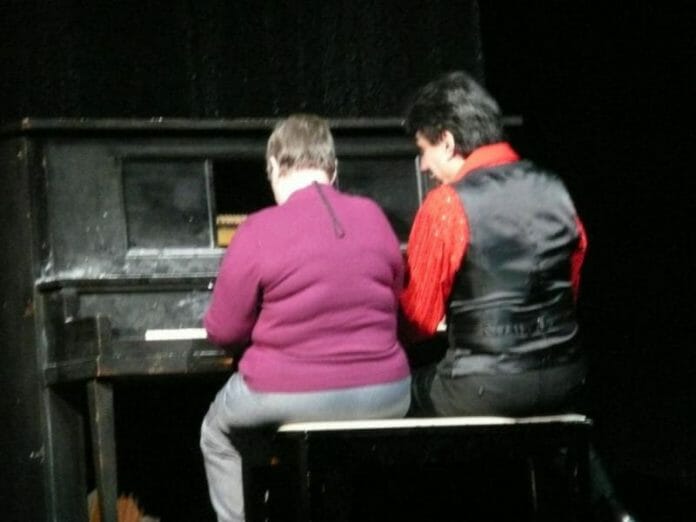 “It was just wonderful for her to step back in life,” said sister Sue. “When we got back, she was a happy girl. She was a …. happy …. girl. That really helped pick her up. It was unbelievable that he picked her out of all the people and after all she has gone through in life.”
Sharen sings in her church choir now in southern Indiana near Louisville, KY. She teaches children’s church. And after her experience with Dino, she is playing the piano again. In fact, she plays the church organ.
Here is a short video I produced of her experience. It was a special moment in time for sure! Good things are happening out there!

From battling Encephalitis to being brought up on stage by Dino!
— Charlie
Motivational opportunity for you

Betty Alexander to speak
For those of you that live near my home base of South Bend, IN, I invite you to come hear one of the most inspirational people I have ever met.
This Sunday evening, Betty Alexander will be my guest at ‘Meet me  at the Heights.’ This is a monthly inspirational program started by the pastor at my church, Dr. Pat Somers. The format has the band Misspent Yooth play songs such as Fun, Fun, Fun by the Beach Boys, My Life by Billy Joel, Night Moves by Bob Segar, and more
from 6:30 to 7:15 and then a guest joins me on the talk show-like set for a 30 minute conversation.
In 1994, Betty’s son Steve was killed by a drunk driver. That crushed her, yet she moved forward. Almost four years to the day later, her son Jimmy was killed by a drunk driver.
How anyone could overcome that is amazing. Betty will share how she was able to move forward and eventually go back to college and get her degree at age 68. Now 80, she works 20 hours a week for a non profit.
For those of you reading this in the South Bend area, come on out! It is free and open to the public. We had to bring in extra seats last month as people came from all over to hear Brett Eastburn, the young man with no arms or legs and no disabilities or handicaps.

‘Meet me at the Heights’ with speaker Charlie Adams
Sunday March 9, 6:30 pm
Special guest: Betty Alexander, author of ‘Tomorrow Will Start Without You’
Evangel Heights United Methodist Church
114 N. Ironwood Drive, South Bend, IN (it is right on Ironwood, near Colfax)

Charlie Adams is the author of 4 books on positive attitude and peak performance, including 2013′s “How to Build a Positive Attitude and KEEP the Darn Thing!!” and “Stoke the Fire Within.” His books and motivational keynotes and seminars are designed to make sure events reach their objectives and to help create winning cultures. Email him at: Charlie@stokethefirewithin.com.
Facebook
Twitter
Pinterest
Previous article
Locomotive is Young Child's Book With Plenty of Steam
Next article
Charleston's First Black Mayor Ready to Bridge Gap