When someone mentions Itta Bena, we are certain that most of our readers either think of the speakeasy-style restaurant above B.B. King’s Blues Club in Memphis, Tenn. or the movie ‘O Brother Where Art Thou?,’ a staff favorite.
However, Itta Bena, Miss., located in Leflore county, is home to more than 2,000 and the hometown to several football all-stars, civil rights activists and B.B. King himself.
The town’s name comes from the Choctaw Indian phrase iti bina, meaning “forest camp”, which also gave the town it’s nickname as the “Home in the Woods”. Interestingly, Itta Bena is part of the Greenwood, Miss. micropolitan area. 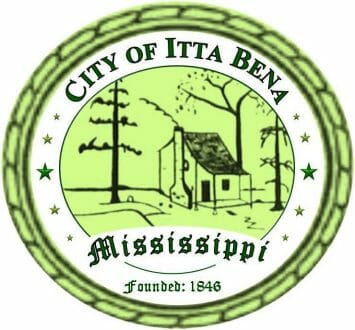 Below is the history of Itta Bena, Miss., courtesy of the City of Itta Bena website.
Early History: Mid-1840s
In 1846, several families from Claiborne County in South Mississippi travelled up the Yazoo River in a fervent quest to locate rich and fertile farm land. These families which included Benjamin Grubb Humphreys (who later became the 26th governor of Mississippi from 1865 -1868), T.Y. McNeil, Eli Waites, Frank and John Hawkins, and others arrived at a place called Roebuck Landing, a name thought to mean “nearby farm.”
The family members and their laborers cut through the densely wooded habitat to find the property alongside a small area of the 19 mile Roebuck Lake as prime for constructing their lob cabins. Hence, the group named the area of land, Itta Bena, an Indian Choctaw phrase for “home in the woods” or “camp together.”
The families developed a viable lifestyle on their plantations, with cotton and corn serving as their chief crops. Their successful production of quality products and abundant water sources became noticed by others, thus making their quaint little discovery more and more appealing to other settlers, especially those interested in agriculture.
Civil War and Beyond: 1860s to 1890s 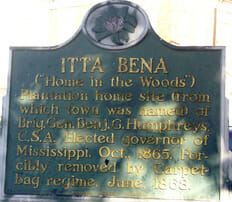 Once the War Between the States or The Civil War began, Humphreys responded by organizing some of the local men and developed a company in Itta Bena named the Sunflower Guards. The group trained by the Yazoo River above Sheppard Town. The Sunflower Guards company joined nine other companies to formulate the 6th (and later the 21st) Regiment, lead by Colonel Humphreys. While fighting in the war, Mrs. Humphreys operated both the steam gin and grist mill providing 100 bushels of meal daily to the confederate soldiers at Fort Pemberton. Despite the fighting nearby and unfortunate casualties, the village continued to flourish with the fertile farmland producing successful crop years.
With the village rapidly growing, the Georgia Pacific Railroad purchased a right of way that traveled directly through the plantation in 1888. In that same year, the first school was constructed with Miss Emma Cross serving as the first teacher. The construction of the railway, Old Southern Railroad (later the Columbus & Greenville Railroad) was completed with the first train traveling through Itta Bena in 1889. As a result of the influx of Deltans and other visitors to the area, J.B. Humphreys, P. Cohen, and Uriah Ray built the first stores to serve the booming center for trading, processing, and shipping crop. The first police station was established and the first house was erected directly in front of the Humphreys’ home in 1891. Within one year, streets were constructed and eight stores were erected.
In 1897, the entire village was in flames with many locals suffering great losses. Nevertheless, the residents rebuilt and the Town of Itta Bena was officially incorporated by a charter on August 1, 1898.
Within seven short years, in 1905, another unexplained fire threatened the success of Itta Bena, and again this set-back did not impede the desires of the Itta Bena citizens to rebuild and maintain a successful agricultural town.


20th Century: 1900s
The downtown district of Itta Bena was carefully crafted by civil engineers to convey a distinct and unique character, similar to its citizens. With a brick streetscape bordered by sets of adjoined buildings facing the street, and the picturesque Roebuck Lake background, Itta Bena’s downtown began to tell the story of its “Old Town” neighboring community. Several restaurants, movie theatres, cafés, shopping marts, and boutiques encompassed the town plaza. 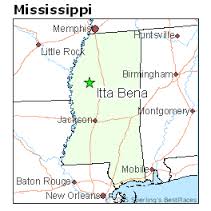 The town even produced its own newspaper entitled “The Itta Bena Times” published by the Delta Publishing Company and formulated the Itta Bena Business League in 1912.
It was thought that probably more Blacks purchased and paid for homes and plantations within a ten mile radius of Itta Bena than in any other Southern settlement. Itta Bena’s location made it a perfect locality for the growing business community. The town was situated less than 10 miles from Greenwood, MS and was right at the crossroads of Highway 7 which ran directly through the city and into Highway 82. During this period, Itta Bena was indisputably the center of the richest agricultural section of the fertile Yazoo and Mississippi Delta.
The centrally located train depot and eventually bus station transported many Deltans in and out of the area and allowed visitors a chance to explore this “home in the woods” often commenting on the aesthetically noticeable arches, columns, and brick designs.
Civil Rights: 1950s to 1960s
During the 1950s and 1960s, the civil rights movement mobilized gaining collective national attention on issues surrounding racial equality in Mississippi and other southern states. The small rural community of Itta Bena was not impervious to these struggles for freedom, equality, and fair treatment insisted by its Black residents.

Although ordinary citizens have struggled to fulfill the American promises of equality under the law for numerous years, the documented history of the civil rights movement in Itta Bena is tracked to April 1963. Local residents and community organizers met at the only place that was open for civil rights activities, Hopewell Missionary Baptist Church located in the “Balance Due” section of town. The primary focus of the meetings was voter registration.
Since a requirement to vote included understanding the constitution and interpretation of the amendments, citizenship and adult literacy classes were held. Northern supporters provided food, water and clothing to meeting attendees. Community organizers received numerous threats and requested police protection from local law enforcement. On May 11th and then again on June 18, 1963, the threats became a reality as tear gas bombs were thrown into the church. After this last incident, the residents engaged in a peaceful procession to speak with the police chief. Along their route to the police station, angry onlookers tossed bottles and tear gas to the group in their protest of the meeting.
Upon arriving at the police department at least 60 men, women and children were arrested and taken to the Itta Bena jail (which was not larger than a bedroom) and were eventually taken to the county jail in Greenwood. The next day attendees were found guilty of disturbing the peace and disorderly conduct and were sentenced to six months in jail and a $500 fine. Only a few of the youngsters were released, but approximately 45 remained in prison and had to work at the Leflore County Penal Farm performing manual labor. While being detained, the group still carried on peaceful demonstrations and were finally released on August 16th.
Itta Bena residents and volunteer groups continued conducting voter registration campaigns and adult literacy education. They attended meetings and training sessions throughout Mississippi and other states and consistently visited local restaurants to try to get the same service as the other patrons. Dr. Martin Luther King, Jr. and other civil rights leaders observed some of the brutal experiences that voter registration workers suffered in Mississippi. Stating that “despite the ever-present problems in the Mississippi Delta region . . . there is a ray of hope.”
These were his sentiments on his tour of Mississippi with workers of the Council of Federal Organizations and students of the Summer Project on behalf of the Mississippi Freedom Democratic Party.
On July 20, 1964, Dr. King arrived in Greenwood, MS to encourage and teach the people about freedom. It is believed that on this city touring, the group travelled through Itta Bena. Over the next few years, voter registration drives and education classes continued in the Delta and throughout Mississippi. James Meredith organized a 220 mile march entitled “March against Fear” from Memphis, TN to Jackson, MS to encourage black voting in Mississippi. On June 5, 1966 Meredith was shot.
Two days later, Dr. King (SCLC), Floyd McKissick (CORE), and Stokely Carmichael (SNCC) decided to unite to continue the march, renaming it the “Meredith Mississippi Freedom March.” Upon arriving in Greenwood, MS on June 16, 1966 (Dr. King left the march for a few days to travel to Chicago), Stokely Carmichael was arrested for trespassing. He later rejoined the group in a nighttime rally and shouted the words “Black Power”. Dr. King joined the group the next day to continue the march. It is believed that during this period on their way to Jackson, the marchers travelled through Itta Bena again, but this time Dr. King stopped and made a speech in the middle of the downtown square. Rev. James Bevel, a former citizen of Itta Bena, worked closely with Dr. King.
As the word spread of the marchers’ arrival, the entire square was filled with supporters. As Dr. King spoke, onlookers recant his soft demeanor, powerful spirit, and simple request “Help Me. Follow me. Follow me.” It was noted that many people did get in line to join the march. Those that did not, lined up in a single file line to shake the civil rights leader’s hands. Other residents recalled running back to their homes to fill up jugs of water to give Dr. King and the others since all of the local stores had closed early. Most of those that were left behind stated that they followed the caravan through the city and watched them depart the city down Highway 7 until they were completely out of sight.
In many civil rights meeting locations, signs were posted that read: “There’s a street in Itta Bena called Freedom, There’s a town in Mississippi called Liberty, There’s a department in Washington called Justice.
Despite any obstacles, Itta Bena residents remained committed to freedom and promoting education. In 1965, the support and development of a Project Head Start Program was in the workings as a pilot program. Once the program was implemented, it was such as that it was extended and continues to this day. By the end of the 1960s the Leflore County Voter’s League and other local based organizations were formed and continued to support the specific needs of the community through economic development, voter registration and adult literacy. 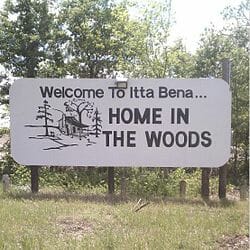 Present Day Itta Bena
The train depot no longer stands as a central post for the city, but the train still travels directly through the downtown district. Itta Bena is still known as a primarily agricultural area, but over the years a community with diverse interests and broad tableau of opportunity has emerged.
The City of Itta Bena is working towards becoming a “College Town” with Mississippi Valley State University, a Historically Black University located within one mile of the city limits. Itta Bena is proud to have bred famous Blues musician B.B. King, who makes an annual trip to the university. Itta Bena is interested in providing sound opportunities for businesses and economic development in the community. The city has worked on several projects with administrators and students from Mississippi. The residents of Itta Bena are always eager to welcome visitors and family members to their little corner of the State of Mississippi where beautiful sunsets, open fields, friendly faces and educational opportunities surround them.
To learn more about the city of Itta Bena, visit the city website at www.ittabenams.homestead.com.