$60 Million Switching from Medicaid to School Funding. The House voted to approve an amended House Bill 1476, and will take $60 million from Medicaid funding to appropriate that funding to K-12 education. House Speaker Pro Tem Greg Snowden (R-Meridian) tweeted his frustration, although over at the Cottonmouth blog, they aren’t buying it. You can read their full write-up over there.
The bill passed the House 48-3 and would help fund the Mississippi Adequate Education Program. See the full writeup at the Cottonmouth blog.
Amended Abortion Bill Draws Limit at 18 Weeks. House Bill 1400, which passed that chamber unanimously Tuesday, would move up the time limit for women seeking abortions to 18 weeks instead of 20. The change was made at the last minute, according to the Clarion-Ledger story, and would base pregnancy on the end date of a woman’s last menstrual period.
The change will not affect the state’s only abortion clinic, which provides abortion services for women in the first 16 weeks of pregnancy, according to a Jackson Free Press story.
A similar Arizona bill was found unconstitutional. A U.S. judge in recent days struck down an Arkansas law that bans abortions past 12 weeks, according to the AP.
Bills that create shorter time limits for abortion services are based on the notion of fetal pain. Evidence regarding fetal pain is quite limited, but literature from the American Medical Association suggests it’s very unlikely before the third trimester.
According to published articles in the Journal of the American Medical Association, only 1.4 percent of abortions are performed at or after 21 weeks’ gestational age.
Prison System Changes Offend Jackson Officials. Sheriffs and district attorneys in the Jackson area are upset with the criminal justice system bill, House Bill 585. More than a dozen people signed the bill, according to The Associated Press story, and sent it to Gov. Phil Bryant.
Their concern is that it will make protecting public safety more difficult, even if it saves money. Supporters claim it could save more than $266 million in a 10 year period, according to the AP story. The Jackson area officials want an extended list of felonies and stronger drug crime penalties.
The bill passed the state Senate 49-3.
And Another Candidate Will Run for Jackson Mayor. Margaret Barrett-Simon, a Jackson City Council member, will announce Monday that she intends to run for mayor, according to a tweet from Ross Adams at WJTV News Channel 12 in Jackson. Barrett-Simon has 29 years of experience as a city council member in Jackson, and is a lifelong resident of the city. 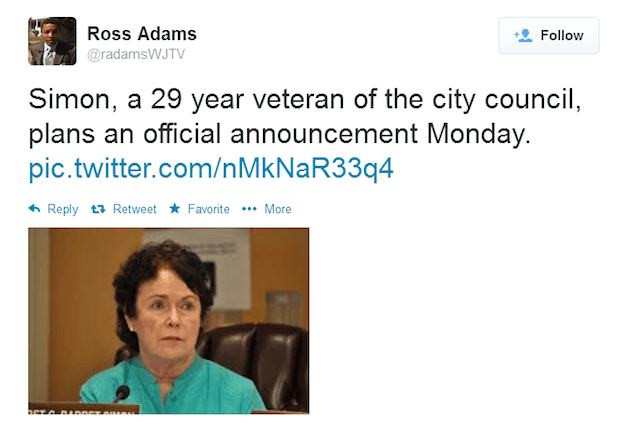 The special election for mayor in Jackson, Miss. on April 8 already has a full slate of candidates. Candidates have until March 19 to qualify for the election.
Other candidates who already list themselves as mayoral candidates via Facebook, Twitter, and official websites are former Mayor Chokwe Lumumba’s son, Chokwe Antar Lumumba; current City Council President Melvin Priester Jr.; Regina Queen; and city council member Tony Yarber. Several other candidates have started the filing process.
Barrett-Simon is a 29 year veteran of the city council.
Compiled by Gretchen Stone, HottyToddy.com associate editor. You can contact Gretchen about state politics at Gretchen.Stone@HottyToddy.com.