Sights, Sounds and Smells of Plein Air at Southside Gallery

March 29, 2014
0
386
For Lucius Lamar, inspiration comes from the senses.
Not just what he sees, but what he smells and hears. The sights, scents and sounds of Taylor/Plein Air hold a special place with this locally-based artist. His oil paintings of the area will be displayed in his first solo show at the Southside Gallery this month.
The artist grew up in Oxford and has been capturing his surroundings in paint since he was young. His family connections to Mississippi run deep. From being a descendant of L.Q.C. Lamar to his mother Patricia Chadwick “Pat” Lamar, who passed in 2012, who was mayor from 1997 to 2001 after having been the city’s first female alderman. During her tenure, parts of Jackson Avenue were widened, the Vision 2020 long-range planning project was completed and the defunct Oxford Country Club was converted to Lamar Park; both it and the National Guard Readiness Center, which she also helped bring about, were named in her honor. His father, Wayne Terry Lamar has been an Orthopedic surgeon here in Oxford and remains a pillar of the community.
Although he maintained strong ties to the region, Lucius had an adventerous spirit. After gaining an undergrad degree in Fine Arts from Ole Miss, his education brought him to Parsons School of the Arts in New York. From there, he was able to study at Parsons in Paris through their exchange program. He then heard the call, ‘head West young man’, and struck out for California to attend UCLA and received a second undergraduate degree in Environmental Design. With his new found education, he and a partner started Carina International in the mid-90s. There he designed products that were produced world-wide for Target and Walmart. After selling the company in 2002, he was able to return to his true love of painting.
And if you’re wondering, beautiful landscapes are not his only subject. He is also an accomplished portrait painter. In the same way he uses the senses of his surroundings, he gets a sense of his subject and incorporates those feelings into each portrait.
You won’t want to miss seeing his work in person, where you can truly absorb the full effect of his colorful, layered painting style.
See you at Southside Gallery, April 3rd 6-8 pm.
Story and photos by Sarah Beth Wiley Smith. Sarah Beth is creative director of HottyToddy.com 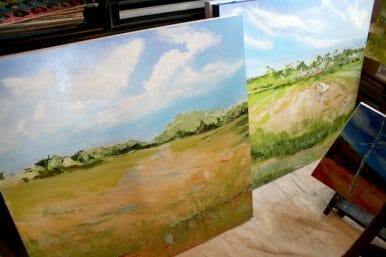 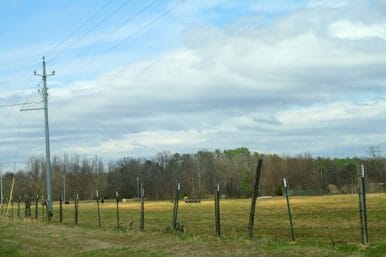 UM students make their own traditions in Starkville

Dunkin’ is Coming to Oxford Next Year