Despite MS, Kayla Becomes One of the Nation's Fastest Runners

I have three remarkable examples for you this week of people with a true ‘fire within.’
First, Kayla Montgomery, a young lady who despite having multiple sclerosis won the North Carolina high school cross country state championship this past Fall.


My son was a high school and college cross country runner so I have been to many meets and have seen some very dedicated runners, but when I started researched Kayla’s story it just blew me away.
When the she was diagnosed with MS three years ago, she was one of the slowest runners on the team, running a 5K (3.1 miles) in just under 25 minutes. Since, she has become one of the 20 fastest high school runners in the country, winning the state title with a time of 17:29, and has earned a scholarship to run for Lipscomb University in Tennessee.
During races numbness in her legs sets in which can be an advantage in that she may feel some of the pain others do, but can be a negative as well. As an 11th grader at the State meet she fell after bumping with another runner. She lay flay on her face unable to move. The fire within her was stoked when a rival came running by. She crawled to a nearby fence, got up, and finished 10th.
She collapses at the finish of every race and falls in to the arms of her waiting coach.

Kayla lives in Winston Salem, N.C. where she carries a 4.7 GPA as a 12th grader, is in numerous honor societies, and has been on service-mission trips to New York City, Puerto Rico and Guatemala.
“I don’t know how much longer I will be able to run,” Montgomery told the New York Daily News. “I don’t want to waste the fact that I’m able to right now.”

The second story I wanted to share with you is of a man with this approach to life:Turn a negative into a positive.
All I do all week is look for inspiration to put into Stoke the Fire Within and How to Build a Positive Attitude and KEEP the Darn Thing presentations. The other day I came across a newspaper article by my friend David Haugh, who is a top columnist for the Chicago Tribune.
March Madness is going on and David wrote about Kevin Kuwik, an assistant coach for the University of Dayton, who made a Cinderella run in the Tournament. After graduating college as a ROTC student, Kevin earned a bronze star during a tour of duty in Operation Iraqi Freedom.
Then, in 2009, while as an assistant coach at Butler University, Kevin was waiting for his girlfriend Laurin Maurer (photo below) to fly in for a family wedding. 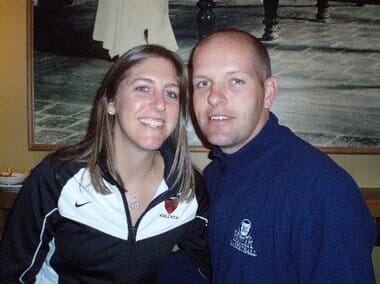 Tragically, the commuter plane crashed because of what the National Transportation Safety Board called pilot error, killing all 49 on board.
Devastated, after time Kevin was determined to follow his lifetime foundation approach of turning a negative to a positive. The investigation into the crash had shown safety shortcomings. Kevin became an activist and made many trips to D.C. dedicated to making air travel safer. While holding a full time job he still made the time to make countless calls to senators’ aides and congressional reps. An assistant coach at Ohio State at the time, he had a boss named Thad Matta who let him to go D.C. anytime he needed to be there, which was over 35 times!
Because of Kevin’s relentless efforts to lobby Congress to come up with training and sleep requirements for pilots. President Obama signed Public Law 111-216, the Airline Safety Law, into effect in 2010. It is arguably one of the more dramatic changes in airline legislation. The key components were changing rules regarding pilot fatigue and pilot qualifications for regional airlines.
The third story is entitled Forged through Fire. I am pretty particular about what video I share here because I value your time, but when I do post something it is usually pretty powerful.
This story, by ESPN special features reporter Tom Rinaldi (who I have known for many years) made its’ debut yesterday. I was in the gym and noticed people had literally stopped in their tracks to watch it on a tv. I did too and afterwards our heads were shaking.
It is about a young girl named Harli who is a race car. During a race, her car flipped and suddenly was engulfed in horrifying flames. Out of nowhere came a man named Donny Ray, determined to save her. What happened to them, and then the stunning twist later, will no doubt impact you.

Charlie Adams is an Oxford native, graduate of Lafayette High School and a member of the Ole Miss Class of 1985. Adams is the author of 4 books on positive attitude and peak performance, including 2013′s “How to Build a Positive Attitude and KEEP the Darn Thing!!” and “Stoke the Fire Within.” His books and motivational keynotes and seminars are designed to make sure events reach their objectives and to help create winning cultures. Email him at: Charlie@stokethefirewithin.com.
Facebook
Twitter
Pinterest
Previous articleNew Senior Pastor Announced at OUUMC
Next articleThe Daily Crime Report for April 1