No. 10 Ole Miss Takes on Arkansas in SEC Tournament Wednesday

The Ole Miss Rebels will start their run for the SEC Tournament title on Wednesday against the Arkansas Razorbacks at Hoover Metropoltian Stadium in Hoover, Ala. 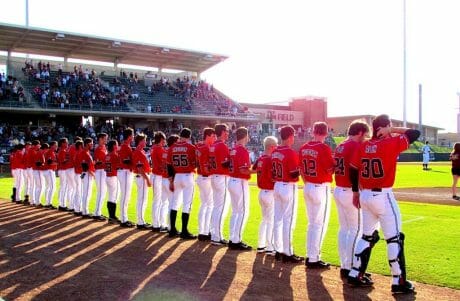 Ole Miss (40-16, 19-11 SEC) comes into the tournament as No. 10 in the country and as the Western Division Champions. All this after being picked to finish sixth in the West before the season began.
Two Rebels rank in the top five of the conference in hits: Auston Bousfield is first with 83 and Will Allen is 2nd with 80. Allen also leads the SEC in batting average with a .359, second in RBIs with 55, and seventh in home runs with 7.
Senior Sikes Orvis leads the team in home runs with 12, which is also second in the conference.
Coach Mike Bianco’s pitching rotation is anchored by Chris Ellis and Christian Trent, who both finished the regular season with a combined 17-0 and 13-0 SEC record.
Arkansas defeated Texas A&M on day one of the tournament 4-0 in single elimination. Earlier this season, the Rebels took two-of-three games in Oxford against the Razorbacks.
Neither coach has named a probable starting pitcher for Wednesday’s game.
In the SEC baseball Tournament, Ole Miss has played in 54 games and has a record of 27-27. The last time the Rebels won the tournament was back in 2006, but they have advanced to the finals on four separate occasions (1977, 2005, 2006, 2008) with a 2-2 record.
Fans that can not make it to Hoover, Ala. can watch tomorrow’s game on SportsSouth starting around 1 p.m. after LSU and Vanderbilt play. Or listen to the game on the Ole Miss Baseball Network.
HottyToddy.com will also be on hand to bring all the action from the tournament!
– Adam Brown, sports editor of HottyToddy.com, adam.brown@hottytoddy.com