Scholtz Advances to Second Round in NCAA Singles 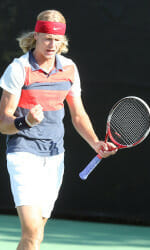 “It was tough,” said Scholtz, the reigning SEC Player of the Year. “It was windy in the beginning. The wind died down toward the end, so that helped me. I started playing better. I’m glad I got that one out of that way because I feel like I can play better. I was serving well, but my game can be a lot better.”
“It was tough conditions,” head coach Billy Chadwick said. “It was a little windy, and it was the first match of the tournament. His opponent had a brilliant game plan. He wasn’t giving him many looks at all. Nik was feeling no rhythm whatsoever. Nik did a great job of finding a way to finally get that break in the second set and win the second set. Nik served really well the last four games.”
Scholtz, ranked No. 12 nationally and seeded 9-16, improves to 26-6 on the year and has lost just one match since mid-January. His win also extends the coaching career of Chadwick, who will be inducted into the ITA Hall of Fame later tonight.
“My goal is to go out there and leave everything on the court,” said Scholtz, who advanced to the quarterfinals of the NCAA Singles Championship as a freshman. “It’s not just about being the best player. There’s way more that has to go your way that week. You have to believe and you have to be mentally there. A lot goes into winning a tournament like this, and hopefully those things start rolling.”
At 5-5 in the first set, Heugas broke Scholtz for a 6-5 lead and then served it out to win the set. Heugas carried the momentum into the second set, where he broke Scholtz for a 1-0 lead. Scholtz broke back to 2-2 and went up a break for a 5-3 lead. After the hard-fought break, Scholtz followed with an ace on triple-set point to force a third and decisive set.
Scholtz and Heugas traded serves to 3-3 in the third set. With Heugas serving, Scholtz went up 40-30 on a well-placed volley, and after Heugas was assessed a point penalty for player misconduct, Scholtz claimed a decisive break to go up 4-3 in the set.
Serving for the match up 5-4, Scholtz double-faulted on double-match point, but he answered right back with another ace to advance to the second round on Thursday, where he will meet Lukas Ollert of Auburn.
Ollert, ranked No. 52 nationally, won a three-setter over Ronnie Schneider of North Carolina in the first round. Scholtz and Ollert met earlier this season in Oxford at the Gillom Sports Center, where Scholtz won in straight sets 6-0, 7-6 (7-5).
“He’s a good player,” Scholtz said. “I beat him in indoors. Outdoors, out here, it might be more of a fair play. He’s one of those guys where if you don’t play your best, you’re not going to win because he doesn’t give you anything, so I have to go out there and play well.”
For updates throughout the NCAA Singles Championship, follow @NCAATennis2014 and @OleMissMTennis on Twitter. There will also be live scoring and video for all matches.
NCAA Singles Championship – Athens, Georgia
First Round
Nik Scholtz (OM) def. Alexis Heugas (VCU) 5-7, 6-3, 6-4
– OleMissSports.com