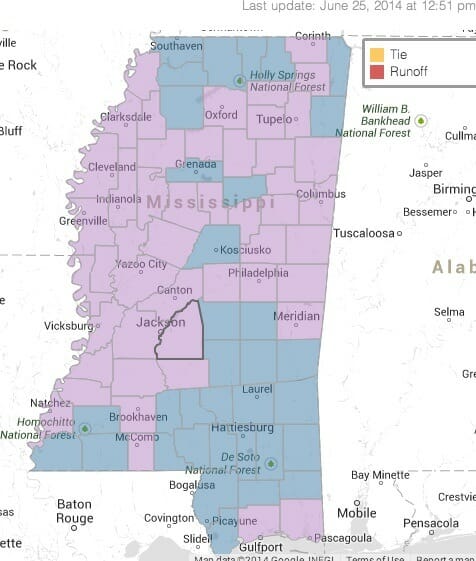 Sen. Thad Cochran’s close victory over State Rep. Chris McDaniel was a numbers game and the final tally here in Lafayette County may have put the veteran lawmaker over the top.
Cochran received 3,926 votes in Lafayette County to McDaniel’s 1,935. That’s 67 percent to 33 percent.
In DeSoto County, where HottyToddy.com traveled to last weekend, click here, the numbers were reversed with McDaniel getting 69 percent of the vote to Cochran’s 30 percent.


Other counties of interest: In Lee County, where Tupelo votes, Sen. Cochran received 58 percent to McDaniel’s 42 percent..
In Hinds County, site of Jackson, the state capital, Sen. Cochran’s vote margin was 72 percent to 28 percent.
Rankin County, in the Jackson area, played out 53 percent for Cochran and 47 percent for McDaniel.

Finally, in Madison County, home of Madison Mayor Mary Hawkins who HottyToddy.com profiled here, the vote was 64 percent for Sen. Cochran and 35 percent McDaniel. Hawkins in the longest serving Republican woman mayor in America and she played a key role in brining the Cochran campaign back in the runoff.
In the aftermath of the hard-fought election, Republicans will have to unite and that’s the theme of this commentary by HottyToddy.com contributor William Fowler.
So it’s on to the general campaign and HottyToddy.com will continue to inform you about the candidates.
Andy Knef is HottyToddy.com editor