Having done extensive research this summer on what we can learn from the Miracle on Ice in 1980, I am fascinated by the insights and the life stories of these once young men who are now pushing towards 60.
The story of Mark Wells is powerful. 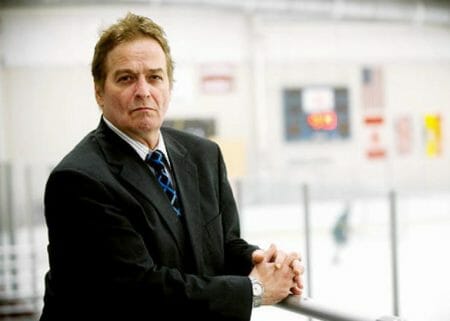 Twenty players were on that time that caused American to wave their flags again and dream big dreams. The final player to make the roster was little Mark Wells.
Wells grew up in St. Clair Shores in southeastern Michigan. He wasn’t very big at 5’8″ but he had the heart of a lion and remarkable skating skills.
He was a walk-on at Bowling Green University. He never got a scholarship but was one of their best players. Because of his lack of size, he always had to prove himself.
When he was one of 68 trying to make the final roster of the 1980 U.S. Olympic hockey team, coach Herb Brooks met Wells’ intensity. Before one game, Brooks told Wells to play right wing that night. Wells told him he was a center, and skated off.
As the seven months of training towards Lake Placid went on, Brooks would send players down to the minors from time to time. He called Wells to the ice for a meeting one day and told him he didn’t think he would make the final roster. He was sending him down.
Wells started a slow burn. Ever since he had watched swimmer Mark Spitz win 7 Golds at the 1972 Games in Munich, he had been determined to be an Olympian. He started to skate around Brooks and said, “I know you play mind games, Herb. Well, they won’t work on me. You may send me down, but I will be back.”
And with that, he spat on Brooks’ skates.
Several weeks later, Brooks made him the 20th a final man on that roster. He wanted that kind of fire within. A big reason they won was that every player bought into what their role was on the team. Although Wells’ had been a scorer in college, Brooks asked him to focus on harassing opposing players in the Games. Against the Soviets, it was Wells given the daunting task of shutting down the vaunted Valeri Kharlamov.
Brooks and Team USA stunned the world by winning Gold that February. When he got back home, his little town in Michigan threw a parade for him. He brought a hockey stick signed by all the players and coach Herb Brooks. 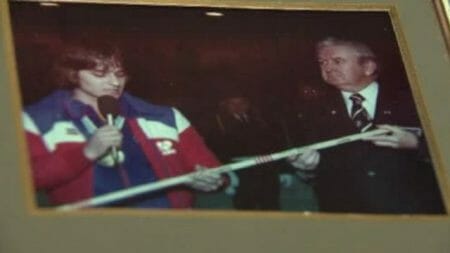 It was presented to the mayor. City officials said they would rename the hockey rink he played in as a kid after him.
Every night for years Wells would sleep with his Gold Medal. It meant the world to him to have been a part of that great American moment. Look at him in that picture below. I can remember those days. In 1980 I was a high school senior and our senior pictures were the ones where they meshed to photos within one and it seemed like all the guys parted their hair down the middle. 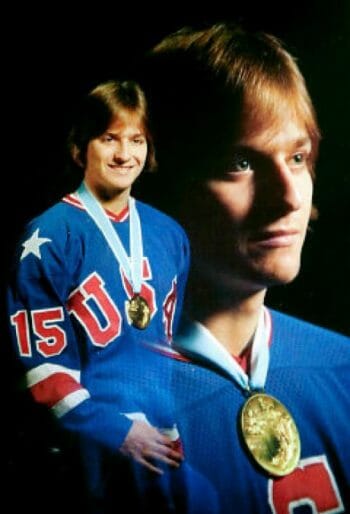 Life was incredible, but about to change.
Wells played some pro hockey, but soon got into the restaurant business. One day while lifting 40 pound crate boxes he fell to the floor with wicked pain. Doctors found a degenerative disc disease that would lead to multiple surgeries and over ten years of being bed ridden. Discs in his lower spine had deteriorated, severing nerves in his spinal cord and leaving him in unrelenting pain. At first he moved in with his mother but feeling he was a burden asked to stay at the small family cabin up in northern Michigan. The pain was relentless. The medical bills stacked up. Years later, he said he wished he had reached out to his Olympic teammates for help, but he never did. Stubborn.
It got so bad to where he strongly considered suicide, laying there alone in that cabin. The next day, he would do it. But, that next morning, the geese made noise. They were hungry.
He had started feeding them, and when he realized they needed him, all thoughts of suicide stopped. Getting up to feed those geese in the morning is what kept him going. We all need purpose in life and for him, that was it.
His financial debt was staggering. It was so bad, he had to do the unthinkable. He sold his beloved Gold Medal, one of the most valuable Gold Medals in Olympic history. It was from the greatest sports moment in United States history.
It about killed him to do it, but he did for $40,000. Fifteen years later the Medal was resold for over $300,000. He saw none of that massive profit from the resale.
Wells started to feel better physically after more surgeries. He was able to get work at a BP gas station. In 2002, twenty two years after the miracle on ice, the entire 20 man roster got together for the first time at the NHL All Star Game. They were to be in a relaxed exhibition game. Coach Herb Brooks kidded them that in introductions it looked like they were being brought out in order of biggest weight gain.
Wells had not been on the ice in many years. He wanted to get back out there one more time. With his teammates helping him, he got on the ice and skated around slowly. He even talked big at goalie Jim Craig that he was going to rifle one past him! The memories flowed for this onetime little fireball who had spat on his coaches feet telling him not to give up on him. 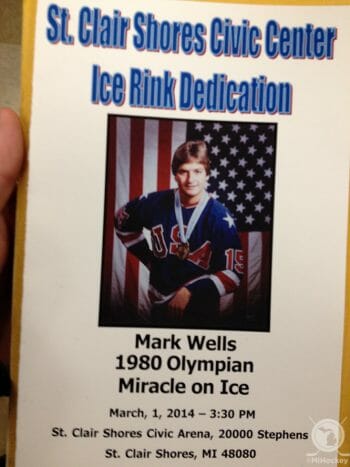 Remember that parade his little town in Michigan gave him? The promise of naming the city hockey rink after him? Never happened, until just a couple of years ago when current city officials realized what had happened. This past March, they had the rink named after Mark Wells in a stirring ceremony.
He got emotional. With him were his two little boys. He hopes against hope to one day get them that Gold Medal. If not, maybe a replica. He will explain to them that Daddy was in bad shape then, and he had to do what he had to do.
Remember that special hockey stick he had signed by all 20 members of the team, one that should be in a special case in the rink named after him? Gone. No one had a clue what city official lost it or stole it or whatever…
Unbelievable.
Mark Wells now speaks to young people and shares his story of perseverance, dedication, commitment to team and fire within. This is a man that has had over a dozen back surgeries, four of them major and one lasting over 11 hours. Through it all he has kept going, saying the lessons he learned from being on that magical team keep him going. 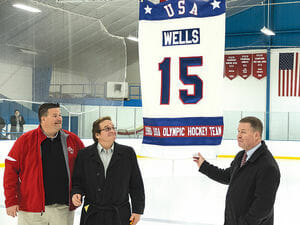 He wants to write a book and call in ‘Last Man In.’
He was the last man to make that historic roster. He was part of a team that made America proud again. After watching them beat the Soviets on TV, one Dad called his son. They had a falling out and had not spoken in years.
“Did you just see what them boys did in that hockey game?” the Dad said to the son. Neither one of them knew a thing about hockey, but they knew how they felt after seeing the greatest sports victory in United States history.
“I sure did, Dad.”
“We should meet, son”
“That would be good, Dad.”
Mark Wells may not have his Gold Medal, but he sure has a legacy.
Charlie Adams is an Oxford native, graduate of Lafayette High School and a member of the Ole Miss Class of 1985. Adams is the author of 4 books on positive attitude and peak performance, including 2013′s “How to Build a Positive Attitude and KEEP the Darn Thing!!” and “Stoke the Fire Within.” His books and motivational keynotes and seminars are designed to make sure events reach their objectives and to help create winning cultures. Email him at: Charlie@stokethefirewithin.com.