September 5, 2014
0
477
CARE of Charleston, Mississippi, will present a 9/11 Documentary Film and Exhibit on the anniversary of the 2001 World Trade Center attack in New York City. The film will be shown at the CARE building on the Charleston, Miss., square, Sept. 11 at 6 p.m.
John Allison, (the son of jazz musician Mose Allison) who now resides in Charleston, spent 11 years working in the North Tower of the World Trade Center at a Brokerage firm before moving to Tucson, Ariz., In 2002 John and his co-producer, Tim O’Grady, returned to lower Manhattan to shoot this film with the members of Ladder 9 – Engine 33 who suffered the loss of 10 of their own that tragic day.
The film, FDNY Dream Bike, highlights the story of Gerard “Biscuits” Baptiste, a young firefighter stationed at FDNY’s Ladder 9, who along with 9 others from his house made the ultimate sacrifice while saving the lives of others at the World Trade Center on 9/11. To commemorate his bravery and his fallen comrades, the surviving members of his unit and the motorcycle community came together to begin the process of restoring a rusted old motorcycle, a 1979 Honda CB750 LTD, that Gerard had purchased just two weeks before his untimely passing. It was Gerard’s dream to restore the bike. The film depicts the restoration process of the FDNY Dream Bike and the healing power that came from working on the restoration of the bike.
Along with the film, CARE will exhibit 9/11 memorabilia, items from John Allison’s personal archives, for your viewing. So plan to come early or stay late and reflect and commemorate those who lost their lives on that awful day. 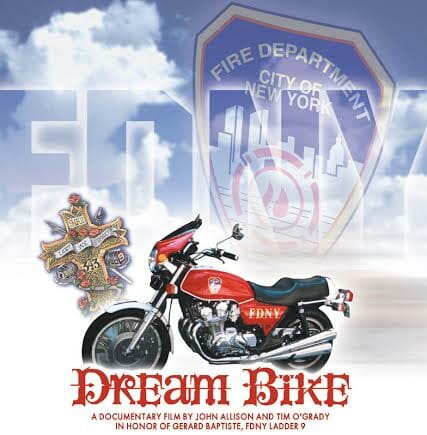 Courtesy John Allison and CARE of Charleston, Miss.
Facebook
Twitter
Pinterest
Previous articleAlpha Delta Pi To Break Ground On New UM Sorority House
Next articleCaramel Factory: Made in Mississippi and Sweeter For It