September 23, 2014
0
507
Ole Miss graduate linebacker Deterrian Shackelford is one of 22 college football players on the 2014 Allstate AFCA Good Works Team®, announced today by Allstate Insurance Company and the American Football Coaches Association.
This prestigious college football award pays tribute to a select group of student-athletes who have worked to positively impact the lives of others. The 22 players honored with this distinct recognition have not only dedicated their time to succeeding on the field, but have made a commitment to enriching the lives of others while contributing to the greater good of their communities.
Shackelford is the eighth Ole Miss player selected to the AFCA Good Works Team and the first since Jason Cook in 2007. The other past Rebel honorees were Kyle Wicker (1996), Walker Jones (1997), Deuce McAllister (1999), Romaro Miller (2000), Eli Manning (2002) and Jamil Northcutt (2003).
Shackelford, who hails from Decatur, Alabama, has participated in a wide range of community efforts like Relay for Life, the Oxford Food Pantry, Reading with the Rebels and a dunking booth that raised funds for cancer patients. He has spent his last two spring breaks on mission trips to Panama and Haiti and his 2011 summer as a pre-college program counselor at Ole Miss. He has also participated in a number of service projects as a member of Omega Psi Phi Fraternity, Inc.
Shackelford graduated in three years with a bachelor’s degree in history and a minor in English and completed a master’s degree in higher education this past summer. He is a five-time selection to the SEC Academic Honor Roll and was a semifinalist for the 2013 National Football Foundation Scholar-Athlete Award.
On the gridiron, Shackelford is the Rebels’ starting Mike linebacker and second-leading tackler with 15 tackles through three games. He is back to full health after missing the 2011 and 2012 seasons due to ACL surgeries. He is the first ever two-time winner of the Chucky Mullins Courage Award and wears No. 38 on the field in Mullins’ honor.
For more than two decades the Allstate AFCA Good Works Team® has been one of the most esteemed awards in college sports. This summer, the program received a record 182 nominations from colleges and universities across the country. A voting panel comprised of former Allstate AFCA Good Works Team® members and college football media reviewed the nominees in an effort to select 11 players from the NCAA Football Bowl Subdivision and 11 players from the NCAA Football Championship Subdivision, Divisions II, III and the NAIA to comprise the 22-player team.
“Allstate takes an immense amount of pride in working with the AFCA to recognize these student-athletes for their good works that have made a positive impact on communities across the country and, in some cases, across the world,” said Jim Haskins, president of Allstate’s West Territory and a member of the 2014 Allstate AFCA Good Works Team® voting panel. “Allstate is a proud supporter of NCAA football and it is an honor to award these young men for inspiring us all with their character and work ethic both on and off the field.”
The following players have been selected to the 2014 Allstate AFCA Good Works Team®: 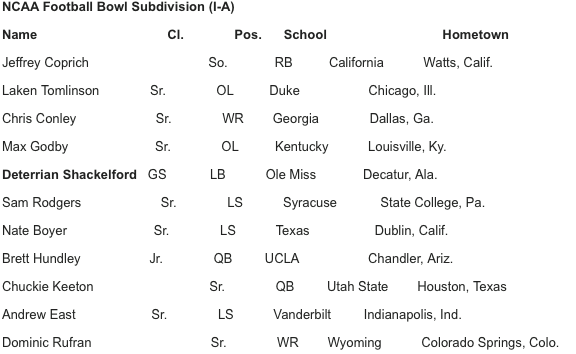 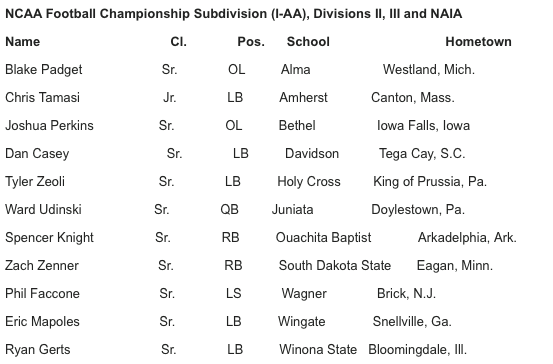 For the past 23 years, this award has recognized countless outstanding acts of service, and the accomplishments of this team are no exception. From creating non-profit organizations and programs to help those in need, to earning a Bronze Star from serving two tours of military duty in Iraq, these 22 players have done remarkable things in their communities and touched many people’s lives.
“The Allstate AFCA Good Works Team® has been highlighting student-athlete volunteerism for 23 years, and the list of honorees keeps getting better each year,” Grant Teaff, AFCA Executive Director said. “The 2014 Good Works Team® members are some of the most dedicated athletes, on and off the field, I have ever seen. It is the AFCA’s pleasure to work with Allstate in promoting such great ambassadors of the game of football.”
Allstate and the AFCA are looking to the fans to help determine this year’s 2014 Allstate AFCA Good Works Team® Captain. By visiting ESPN.com/Allstate, fans can learn more about this year’s team members and vote for the player who they feel best embodies the spirit of the Allstate AFCA Good Works Team®. The Team Captain and his fellow award recipients will also be invited to New Orleans to take part in a community project leading up to the 2015 College Football Playoff Semifinal at the Allstate® Sugar Bowl®.
The 2014 Allstate AFCA Good Works Team® voting panel includes: former Good Works Team® members Zaid Abdul-Aleem (Duke, 1994 team), Matt Stinchcomb (Georgia, 1997, 1998 teams), Brian Brenberg (St. Thomas, 2001 team), Mike Proman (Amherst, 2002 team); media members Lou Holtz (ESPN), Kirk Herbstreit (ESPN), Bruce Feldman (Fox Sports),  Blair Kerkhoff (Kansas City Star); current AFCA President and Ithaca College head coach Mike Welch; 1987 AFCA President and former head coach at Brigham Young University LaVell Edwards; and Jim Haskins, president of Allstate’s West Territory.
Follow Ole Miss Football on Twitter (@OleMissFB) and Facebook (Facebook.com/OleMissFootball), in addition to www.OleMissSports.com.
—Ole Miss Sports Information
Facebook
Twitter
Pinterest
Previous articlePrecautionary Water Boil Notice Issued for West Oxford
Next articleOle Miss Renames Coliseum Drive to Chucky Mullins Drive