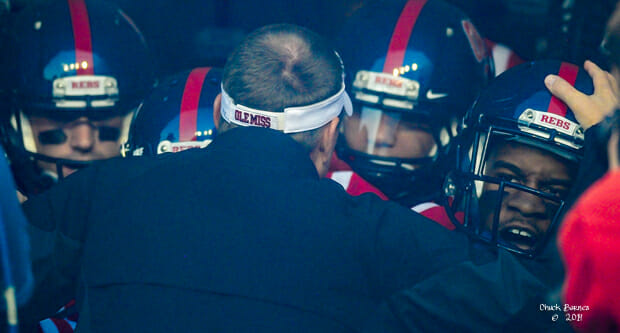 Ole Miss enters Week 13 of the regular season as No. 8 in the country after coming off a bye week. This week, the Rebels are heading up to Fayetteville Saturday to close out the road slate of the schedule.
Last time on the field, Ole Miss defeated the Presbyterian Blue Hose by the score of 48-0, where a lot of the team got some valuable minutes in the game, giving a number of starters some much needed rest.
The Rebels are going into the weekend against a Razorback team that picked up their first conference win since the 2012 season as they blanked the LSU Tigers 17-0, and Arkansas is coming into the weekend with a lot of high emotions after the win following multiple close losses.
On Saturday afternoon, the Rebels will have to prepare for possibly some wet conditions in northwest Arkansas as they are predicting rain for the game, possibly causing problems for the skill players and the passing attacks.
With sophomore Laquon Treadwell being out for the remainder of the year, the Rebel receivers will have to step up and Evan Engram will probably play a bigger role. Laremy Tunsil did a great job in Sunday’s practice, and coach Hugh Freeze does not see any reason why he will not be good to go for the game.