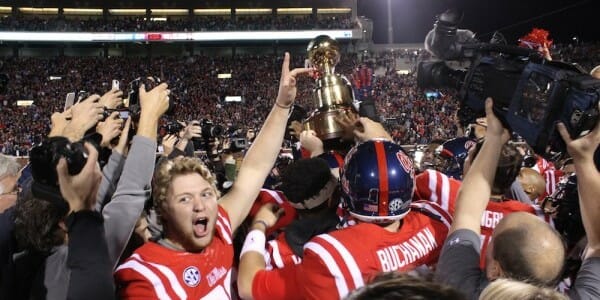 Thank goodness for last Saturday and the Rebel’s victory over arch rival Mississippi State.
The victory eased the hurt I have had since the Arkansas debacle. I have diligently searched for a definitive article on what in the world happened in Fayetteville, but I have not found any reasonable explanation.
I realize that our football team (with the exception of perhaps D.T. Shackelford) are just kids. They are 18-, 19-, 20-year-olds playing a game and getting through college. I question whether any or many of them fully realize what agony they put us old diehard fans through when they suffer a humiliating loss like the one against the Hogs.
I am old enough to remember the glory days and even then we suffered an occasional loss which would send my father, an Ole Miss alum, walking with a blank stare around and around the block where our family home sits in Clarksdale. He would stay depressed until another Ole Miss victory came along.
My wife, Francine, takes Ole Miss football far too seriously. We have season tickets, and we love the friends we sit with (or stand with as it was last Saturday), but Francine cannot bear to actually witness what is happening on the field so she leaves her seat for most of the game and paces from one end zone to the other on the west side under the stadium.
She knows all the vendors and they probably all wonder “What is this lady doing?” When she hears a favorable crowd roar, she rushes up through the nearest portal to ask “What happened?” During the few moments of the game that I can get her to remain in Seat 7, Row 26, Section F, she sits with her head down in her hands while everyone around her is standing and shouting.
She doesn’t take a joke about Ole Miss very well so I have resolved to not be critical. In closing, thank you Ole Miss football Rebels for last Saturday. You have improved my wife’s disposition and mine as well.
We are looking forward to following you to a bowl game, provided it is in Florida. I will not make another trip to the Jimmy Johnson stadium. At the last Cotton Bowl, our seats in the middle of the “Ole Miss section” were so high that we could not even read the numbers on our player’s uniforms. Plus, Dallas can be cold in late December/early January. 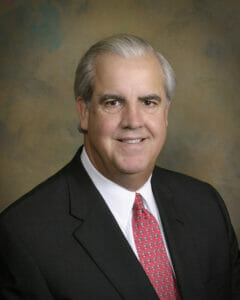 A 1973 graduate of the University of Mississippi Law School, Bill currently practices with Luckett Tyner Law Firm, P.A. which has offices in Clarksdale and Sumner, Mississippi.  His major practice areas are civil litigation and entertainment law.  He was an officer in the Mississippi National Guard and was a candidate for Governor of Mississippi in 2011. He can be reached at wol@lucketttyner.com.