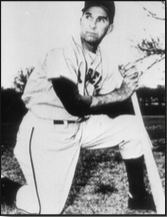 Tom Swayze was one of the driving forces that helped Ole Miss football become one of the nation’s powerhouses from the 1940s through the 1970s. He also coached baseball at Ole Miss from 1951-71 with unparalleled success.
Swayze has always been considered the South’s first full-time college football recruiter, a position he held from 1947- 71. He was one of John Vaught’s first and most important hires at Ole Miss and he recruited many of the Rebels’ greatest football stars.
The Yazoo City native led Ole Miss baseball to the College World Series three times. His Rebel baseball teams won four overall Southeastern Conference championships in 1959, 1960, 1964 and 1969. They won eight SEC West titles in 1954, 1956, 1959, 1960, 1963, 1964, 1967 and 1969. As champions of the NCAA District III, the team advanced to the CWS in 1956, 1964 and 1969.
Swayze was named District III Coach of the Year three times, and SEC Coach of the Year four times. He has been inducted into the American Association of College Baseball Coaches Hall of Fame. Swayze played at Ole Miss from 1930-32. He was pitcher on the baseball team and an end on the football team. He participated in the North-South All-Star football game in 1932.

After college and before his coaching career, Swayze played baseball for the Memphis Chicks of the American Association and also in the Cotton States League. The baseball field at Ole Miss – Swayze Field – is named for him.
He died in 2003 at the age of 83.