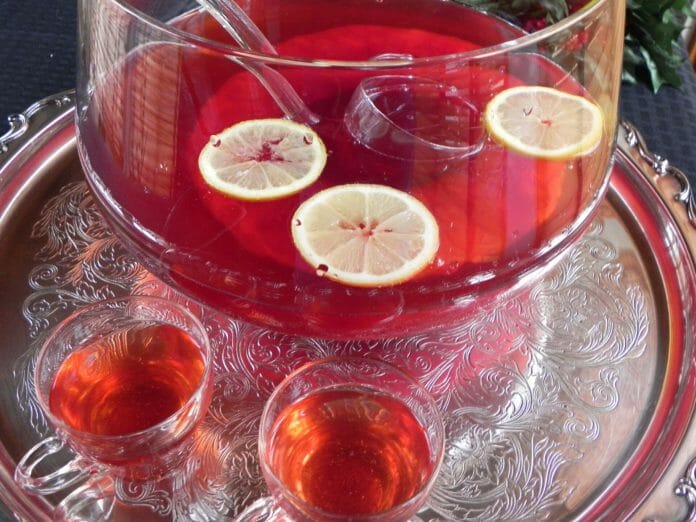 Three Sheets to the Wind: Same as “Tight as a tick on a lazy dog” or “can’t lie down without holding on” or “pie-eyed” or “hammered” or “loaded” or “walking on a slant.” … In other words, that fella’s been “feeding his face with bar glasses” to the point of heavy intoxication. Definitely the opposite of Pat Boone when he wakes up (clear-eyed).

It’s time to ring in 2015 with a cup of good cheer and toasts among friends. Here are three alcoholic classics to prepare just in time for all those New Year’s Eve and Peach Bowl parties.

My Killer Eggnog puts a different spin on the genre while maintaining a smooth but not-so-subtle kick. Jack’s Frosted Punch is tasty for special occasions year round, and the Hotty Toddy Mulled Cider will warm your innards during the coldest days of winter.

Be sure to designate a sober companion for the drive home. 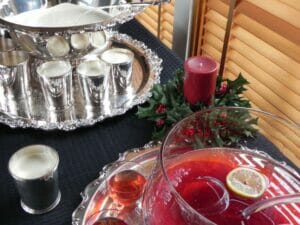 For a non-alcoholic version, substitute 2 liters of ginger instead of champagne and a pint of raspberry sherbet for the Chambord.

2 to 3 bottles of chilled champagne

Combine cranberry cocktail, lemon juice and sugar, blending well. Freeze in a bundt cake pan or in a ring mold such as the type used for molding congealed salads. 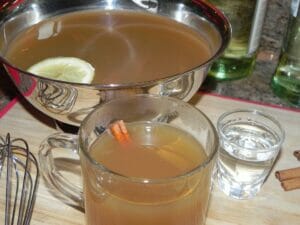 Simmer the cider, allspice, cinnamon, and cloves for 20 minutes. Whisk in the lemon juice and orange juice.

Continue to simmer until ready to serve, adding brown sugar if the cider is not sweet enough. Strain and serve while still hot, topped with rum to taste. YIELD:  10 servings. 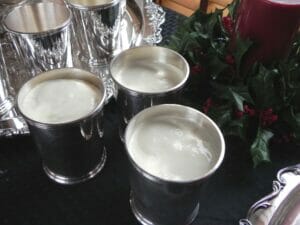 I developed this many years ago due to my distaste for bourbon. The original version is featured in the December 2014 issue of Delta Magazine. This cooked-yolk custard was the result of not being able to obtain pasteurized eggs this year. Feel free to adjust the alcoholic content downward and the whipped cream content upward.

Half pt of whipping cream

Separate the egg yolks and egg whites, careful not to allow any yolk into the whites. Cover the egg whites and refrigerate. Beat the 12 egg yolks on high speed in stand mixer until light and fluffy. Gradually beat in 2 cups of confectioner’s sugar.

Heat milk and first cream in a 4-quart saucepan just to the boil point (scalded). Remove immediately from heat when edges begin to bubble. Stir in the nutmeg.

Resume beating the egg mixture on medium-low speed and with mixer beating, slowly add about a half-cup of the scalded milk through a narrow funnel, to temper the eggs. Turn mixer to high speed and carefully and slowly add remaining hot milk through the funnel in a steady stream. Continue beating for about a minute.

Pour hot egg mixture back into the saucepan  (may have to use a larger pan which has been preheated with hot water (removed and pan wiped dry). Heat egg mixture  to about 160˚F, stirring gently and continuously with a spoon until the custard is thick enough to coat the spoon. It won’t take long.

Pour mixture into a container and place the container in an ice bath (a larger bowl of crushed or cubed ice). After chilling for about 3 minutes, beat in the B&B, rum and Kahlua until completely blended. Place container on ice and store in fridge for at least an hour to cool. About an hour before time to serve the eggnog, place the custard mixture in freezer for about 30 minutes. Beat egg whites to soft peaks.

Remove custard from freezer. Fold in the egg whites and beat on low with hand mixer.

Whip the half pint of cream with remaining sugar. Carefully fold this into the nog until blended. Serve immediately or chill in fridge until ready to serve, stirring first with large spoon.