I was driving in the Midwest the other day after doing a program in Fort Wayne when I turned onto a Chicago Talk Radio station and came across a story of love and true commitment. Have you ever developed perception of someone and never in your wildest dreams would you think they would come up with something totally apart from your perception?
Well, Rich King was the guest on the News/Talk program. Having lived in South Bend for many years, which is close to Chicago, I recognized King as a WGN TV sports anchor. He always struck me as very intense and focused. I knew nothing about his personal life and that he had been in a fairy tale-like marriage.

I had no idea he had written a deeply touching book called ‘My Maggie’ that had moved thousands to emotional and grateful response to know of their story.
Rich and Maggie were married for 32 years. He fell for her when they met as 2nd graders. She had hearing aids from age 4 and they were the cumbersome, large ones that led to being teased on the playgrounds. He said she wore long hair then in part to cover the hearing aids, to lessen the teasing from others.
During the interview I heard Rich say that after they got married Maggie suffered from a disease called Usher Syndrome which progressively robbed her hearing and vision. “It kills the cells in both functions,” King said. She offered him an ‘out’ of the marriage. He never considered it.
Maggie also battled three different cancers: skin cancer, breast cancer and ovarian cancer. Yet she was the happiest person he said he had have ever known. She was a counselor for the Chicago Lighthouse for the Blind, as well as their chief Volunteer officer. She advised the governor of Illinois, and lobbied at the state capitol in Springfield, and in Washington, D.C. She was also involved in countless causes on behalf and the sight impaired, blind and deaf. 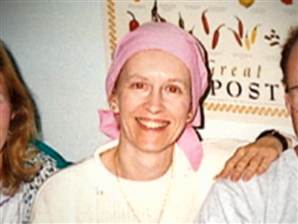 Ovarian cancer would finally claim her in 2002 at 53.
King said their life was not easy at times. “When you are told you are going blind you don’t celebrate by going out to dinner,” King said. “She went through mean depression and threw stuff. I don’t try to sugar coat our story. Ninety five percent of it was good, but she had her down times. She became angry and one time threw a shoe at me. There was a period where she was suicidal. We had to give up things like movies and going to dinner parties because of accidentally knocking things over and she one time fell into a swimming pool, but she came through those challenges and we learned together.”
“Adversity can build a bond,” he said. “It can make you split or it can make you stronger, and it made us stronger. Being a caretaker for her became another part of our marriage. I never once considered leaving her.”
“There was not a cynical or mean bone in her body.”
Five months before passing, Maggie said, “Thank you for a wonderful life.” At the very end when ovarian cancer had taken its toll, King said it was unendurable for them to say goodbye to one another. They could not do it. She knew it and passed away while in a coma.
For years after the loss of soul mate Maggie, King found himself feeling lost and depressed. He would go to the same neighborhood cafe they used to go to and sit there for hours some days. He would think about the good times, about a wedding that set them back just fifty dollars. He would beam as he thought how she became a registered nurse and got a college degree from Loyola so late in life. One time she fell off a train platform on her way to class. It terrified her but she kept going.

One day a customer saw him and walked over, listened to his story, and urged him to put it all down on paper. Even if it didn’t become a book, it would be good for me to get it all out.
It became a book called “My Maggie,” a love story that has sold tens of thousands of copies and led to countless letters and emails to him from readers.
He wrote the book five years after her death, never thinking he would meet someone again. A couple of yeas later, with the help of friends and loved ones, King was eventually able to pull himself up and start dating again. He connected with a woman named April, who would later become his second wife in 2009. Friends had given him her number. He had held onto it for over a year before calling…
Sixty five percent of the royalties from ‘My Maggie’ are being donated to The Lighthouse for the Blind and The American Cancer Society. King has recently written ‘Back in the Game’ to encourage people that life can go on, like it has in his case.
Below, I have put in a touching story by The Today Show and Lester Holt on My Maggie. It really captures their love story.

Lester Holt of NBC Today Show interviews Rich King about ‘My Maggie’
If you are interested in ordering My Maggie in Kindle or any other form, here is a link
Have a blessed end to 2014 and very best wishes for the coming year.