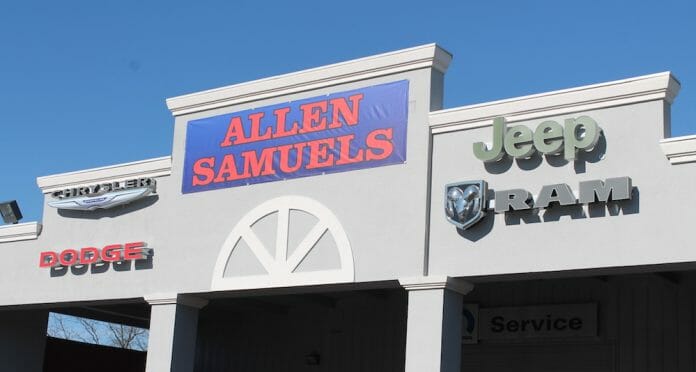 Bryan Barron Johnson is president and general manager of Allen Samuels Chrysler, Dodge, Jeep, Ram of Oxford and a Mississippi native. Johnson grew up in Booneville and went to school at Thrasher High. 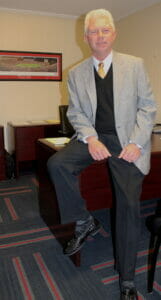 Johnson went to Northeast Community College after high school and had plans to be a high school basketball coach when he decided to take a break. He made his way to Dallas where he met his wife, Cindy, of 28 years, started selling cars and never came back. The couple has three children: a daughter Jordan, 26; Blake, 23; and Greg, 19.

“I met Allen Samuels in Texas,” Johnson says, “and I’ve known him now for 25 years and worked for him for the last 20. At one time, he owned around 20 dealerships in Texas and sold them all in 2005 to three people inside his group, and while he sold the businesses, he still owned the property, but finally sold it too in 2013.”

But entrepreneurship ran deep in Allen Samuels’s blood. Johnson says in 2009 Samuels started over, buying another store in Waco, Texas which was entirely his and not part of the group. He also opened a store in Aransas Pass, Texas, on the coast and eventually, the Oxford location, which became his third store.

Johnson ran a large Chrysler store with 150 employees in Katy, Texas, a suburb of Houston. While he loved Texas, he says he’d never forgotten his home state and the connection he’d felt with it. And the fact that his wife had fallen in love with Oxford didn’t hurt the cause of moving back to the Magnolia State any either. 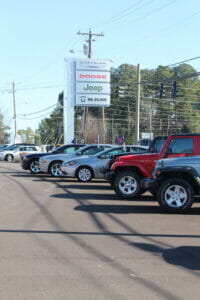 “I moved away from Mississippi 32 years ago, physically,” Johnson says, “But part of me never left. My roots run very deep. Our oldest son, Blake, had started at Ole Miss in 2009. My wife at that point began to make frequent trips to Oxford and fell in love with the city. We began to talk about how nice it would be to live here. In 2012, we bought a townhouse over on Old Taylor Road, and then when we found out this dealership was for sale, which was in July 2014, it seemed perfect, especially since Mr. Samuels was looking for another dealership, because he really wanted to expand.”

They made an appointment to meet with Larry Chandler, then owner of 31 years of the Chrysler, Dodge, Jeep, Ram dealership in Oxford and struck a deal to buy it, taking over in September, 2014.

“Mr. Chandler is one of the nicest men I have ever met and we have a great relationship with him,” Johnson says. “We are very grateful to him for allowing us to be able to purchase the dealership.”

Johnson says Samuels invested in updating the business cosmetically as well as putting in all new service equipment, lighting in the service department, and other improvements.

“These are just some of the things we’ve done to provide a better place for the employees to work, which is very important to us,” he says. “We want our employees to enjoy coming to work and also provide a good place for our customers to come in and do business. That’s what we were after with the upgrades.” 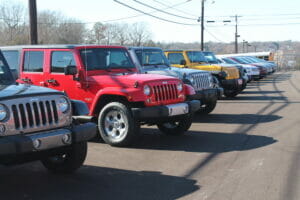 And Johnson says they weren’t finished with the improvements yet. “We’re going to continue making more improvements as we go along,” he says. “With our new shop equipment, we bought lifts and a state-of-the-art front end alignment machine. And it is state-of-the-art. It’s computerized and can handle bigger vehicles. For example, we’re now doing alignments on some ambulances, and we’re very excited to have a machine that can do these larger vehicles. And we offer a full service department to all of our customers.

Johnson says when they took over the dealership there were 17 employees working there.

“And we kept every single employee,” he says. “We felt that was extremely important to our success. We’ve also added 10 additional employees to be able to provide better customer service as our business grows.”

Allen Samuels Chrysler, Dodge, Jeep, Ram of Oxford has a motto that Johnson and all of his employees believe in: “Come by, let’s be friends.”

“And Allen Samuels has been doing that for over 30 years,” Johnson says. “We believe in that and we mean it. Our community and its values, our employees and our customers, are what matter most to us. We love Oxford and the people. And we appreciate the opportunity Allen Samuels has provided us with. There is no person on earth who has made a bigger impact on me and my family than him. He has always believed in being involved in and giving back to the community. We look forward to being able to do the same here in Oxford.”

Angela Rogalski is a reporter for HottyToddy.com and can be reached at angela.rogalski@hottytoddy.com.