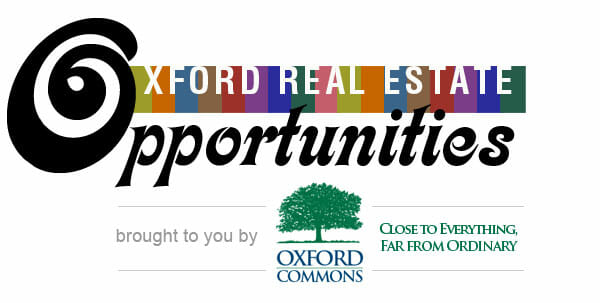 In HottyToddy.com’s bimonthly real estate column sponsored by Oxford Commons, we will attempt to focus on all the ins and outs of what’s taking place in Oxford and Lafayette County real estate. This past year was an extremely active one with several new hotels, subdivisions and retail shopping centers all contributing to the city’s growth. High end condos continued to surface with no apparent end in sight.

Oxford Commons launched in 2014 and got off to an incredible start on Oxford’s east side. I recently spoke with David Blackburn, the developer for Oxford Commons, regarding his forecast for the new year.

“We are projecting about 40 to 50 home sales for the upcoming year ranging in price from the mid $200s to the mid $400s,” Blackburn said. “There will be a good mix of courtyard homes and traditional homes with a diverse group of homeowners including families with kids, professionals without children and empty nesters.”

In addition to the continued anticipated growth in the residential sector, a very encouraging forecast is also being extended in the commercial area. Here is John Trezevant’s outlook for 2015. Trezevant is president of Trezevant Realty Corp. headquartered in Germantown and a leading developer here in Oxford.

“Our town will see several meaningful subdivisions started that could bring to the market a combined portfolio of affordable houses for young families to take advantage of and several of the higher end variety with larger lots and houses,” Trezevant said. “It’s also very likely that a significant retail grocery component(s) will recognize that our market is under served and make plans to open a grocery store (or two) in town during the year. In 2015 $50M in new retail will be under construction bringing to Oxford a mix of merchants not currently present in the marketplace, adding excitement, variety, jobs and tax revenue for our city. Look also to see new road construction, opening up areas for development that until then weren’t readily accessible.”

“The Tommy Morgan Team is excited and confident about the move into the Oxford real estate market. This top producing team of more than 60 agents is adding more agents to the sales staff and making great plans for 2015.”

As you can see, there is a lot going on here with no slow down on the horizon.

Steve Vassallo, CEcD/EDFP, is active in residential and commercial real estate with Premier Properties of Oxford. Steve is an Ole Miss alum and can be reached at sovassallo@gmail.com or (985) 852-7745.