On the same day the Rebels gained a commitment from four-star defensive back Montrell Custis, the Landshark Defense added another shark to the water in defensive tackle Ross Donelly. The Cypress, Texas native announced his decision on his Twitter page last night.

“I’d like to thank all the schools that showed interest in me it was tough making my decision but iv decided to take my talent to olé miss!” 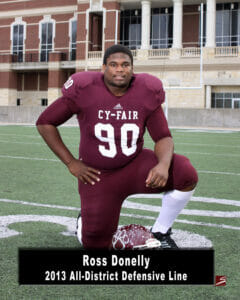 Afterwards, he tweeted a “#Hottytoddy” before announcing he’s now turned his focus toward finding a date to the senior prom.

“Next big decision now..who am I asking to prom,” he tweeted and promptly received a slew of responses.

Donelly, a high-scoring student, chose Ole Miss over finalists Stanford, Vanderbilt and SMU. The one-time Rice commit also had offers from Fresno State, Northwestern and Texas Tech. At 6’2 and 300 Lbs., he is a tremendous force in the trenches and is highly disruptive.

The commitment gives Ole Miss two defensive tackles in this class, joining four-star junior college signee D.J. Jones who flipped his commitment from Florida State to the Rebels in December. The first day that high school prospects can sign a National Letter of Intent is tomorrow with coverage on HottyToddy.com beginning at 8 a.m.