A grandmother’s wisdom is a remarkable thing. Many of us wish that we’d taken the time to glean a better understanding of who our grandmothers were and had listened to the amazing stories they could have shared with us about their lives. For some of us, it’s not too late; but for those who have lost their grandmothers either to the ravages of time or to their passing; the memories of what could have been can be poignant.

Alysia Burton Steele began her journey of discovery because of such memories. Steele was born in Harrisburg, Pennsylvania. She is a woman who has lived in many cities over the years and found her way to Oxford and Ole Miss a few years ago.

“I’ve lived in Dallas, Columbus, Ohio, Atlanta, several places in Michigan,” Steele said, “and then I moved to Oxford in July, 2012 to teach at the University of Mississippi.”

Steele grew up with a burning passion for photography. Since she was 15-years-old, her one desire was to feel a camera in her hand and bring her visions to life behind the lens.

“I started photography when I was 15 and in high school,” she said. “My high school was an art school, so I took academics in the morning and art classes in the afternoon. It was reminiscent of the musical “Fame,” if anyone remembers that. My high school was an arts magnate school and it was free to city kids, and kids from all over Pennsylvania could go if they were accepted.”

After high school graduation, Steele went to college and while she won many scholarships to study photography, she opted to follow the advice of the grandmother who raised her and choose a “real” major. She flunked out after her second year.

“We fought on that a lot,” Steele said. “My grandmother didn’t consider photography a real major and was worried about how I would make a living afterward. And even though I had been offered the photography scholarships, she wouldn’t let me study photography. So, I applied to two schools and was accepted into one, which I was OK with attending; it was a state school in Pennsylvania, but I flunked out simply because my heart wasn’t in my studies, it was in photography and I didn’t apply myself.”

Steele said that after she flunked out of Indiana University of Pennsylvania, she moved back home and got a job, which she hated. So, she decided to put herself through art school.

“I put myself through the Art Institute of Pittsburgh and received my associate’s degree in photography,” Steele said. “Then, eight years later, I transferred back to the school I had flunked out of to face my own personal fears and ultimately got my journalism degree there.”

Once she was doing what her heart had always longed to do; Steele went to work. She interned her last year of college at a local paper, did internships in photography at three different newspapers in Michigan and was hired at the Columbus Dispatch in Columbus, Ohio as staff photographer.

“I worked my way up as a picture editor,” she said. “Then I received a phone call from the Dallas Morning News saying that they had heard about my work and wanted me to apply there, which I did and got the job. I was working the night that Hurricane Katrina came across the news and we were already planning to send some photographers, so I called my director of photography and told him we really needed to send more because it sounded like it was going to be worse than anticipated. He told me that I was working the night desk and to make a decision. So I called some staff reporters and they left early to go down there.”

Steele and the group of Dallas Morning News staff photographers who went to cover the catastrophic hurricane won a 2006 Pulitzer for their photographs.

“It was a team effort on the Pulitzer,” Steele said. “It belonged to everyone, but especially the photographers out in the field.”

While in Dallas, the Atlanta Journal Constitution called Steele and offered her the position of deputy director of photography, which she applied for and accepted.

“I wanted to learn multi-media, editing and producing, but unfortunately the Atlanta Journal didn’t think editors needed to know those skills, so I agreed to disagree, quit and went to graduate school,” Steele said.

After grad school and a few positions at a couple of different magazines, a friend told her about a position at Ole Miss in the Meek School of Journalism and New Media.

“I applied and the university asked me to interview and they hired me,” she said.

Today, Steele is teaching five different classes, including photojournalism and beginning writing and is about to embark on a tour for her new book, Delta Jewels. The idea for the book brought Steele’s journey full circle and back to the memories of the grandmother who raised her. Steele is bi-racial and while she could trace her Caucasian roots back to Ireland, her African American heritage was all but lost to her. 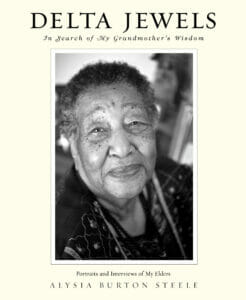 “It’s titled Delta Jewels and the subtitle is: In Search of My Grandmother’s Wisdom,” she said. “My grandmother was a southern woman; she was from South Carolina. And she died 20 years ago. And I never sat down with her to know her stories; I never asked her about them. And I don’t know a lot about her, even though she raised me from age four until I was 18. We butted heads a lot, for sure. So I never took the time to ask her more about her life or to collect her stories and that always bothered me. That was my one regret as a journalist and as a granddaughter.”

When Steele moved south and saw the cotton fields of the Delta; she immediately thought about her grandmother and what she might think of the twists and turns of Steele’s own life.

“I couldn’t pick up the phone to call her and that really hit me hard,” Steele said, “and I told myself that while I may have blown it with her, I still have these skills and could interview and photograph other people’s grandmothers. And that’s what I did with the book Delta Jewels.”

With no grants and very few contacts, Steele set out on her mission to interview and photograph as many African American grandmothers in the Mississippi Delta that she could.

“Thanks to many people like Bill Rose and Clarksdale Mayor Bill Luckett,” Steele said, “I made some contacts and it just took off from there. I ended up with 54 women who agreed to be interviewed and photographed.”

Steel said the book started out as a personal project and was never meant to be something nationwide.

“Honestly, it was about self-fulfillment and the loss I felt where my grandmother was concerned,” she said, “but the book has given me a peace inside about things. I sometimes wonder what my grandmother would say if she knew that I did what I wanted after all, and was successful at it. I think she was so against me becoming a photographer because of her worry for me; how many female, black photographers were out there making a living at it then? All she ever wanted was for me to be happy and have a good life. I hope she knows that I am.”

The book “Delta Jewels” comes out April 7 with the first signing at Square Books at 5 p.m. Follow Steele on Twitter @itsasteele.